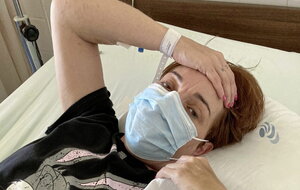 Marti Gorman in hospital in Portugal. Picture from Laura Gorman

A WEST Belfast woman who suffered two strokes while at a family wedding in Portugal is now on the long road to recovery, her cousin has said.

Marti Gorman, from the Falls Road, was left fighting for her life a day after the wedding in the Algarve on August 1.

The 48-year-old is still seriously ill in hospital.

Her cousin Laura Gorman, who remains in Portugal to look after Marti, said the family are desperate to get her home.

"We were able to sit with her for two-and-a-half hours yesterday, which was brilliant," she said.

"She's in a high dependency unit with two elderly women.

"Yesterday she walked to the toilet with a zimmer (frame) by herself.

"Her left leg was trailing a bit and she was shattered but she is just so determined.

"Everyone who knows our Marti just loves her.

"Our Marti turns every negative into a positive."

The family will also have to pay a large bill for Marti's hospital stay in Faro, although they do not yet know how much this will cost.

"She's still not able to fly so we'll have to wait for the consultant to say when she can fly," she said.

Laura said she was due to meet an official from the Irish embassy today to discuss how the family can pay the hospital bills and arrange transportation home.

Following The Irish News's coverage yesterday, 247 Aviation Air Ambulance, a private company based at Belfast International Airport, offered to fly Marti back to Belfast for around £20,000.

The company, which employs experienced medical staff including intensive care nurses, was set up earlier this year.

The wider 247 Aviation company carries out blood and organ transport work in the UK.

"I saw how much they (the Gorman family) were quoted to raise and thought it was rather a lot of money," she said.

She said families are often directed to air ambulance companies through brokers which add a percentage cost.

"We're happy to help them (the Gorman family) negotiate their way through this," she said.

"We can also arrange the hospital admission in the UK."

Laura Gorman said she was delighted with the company's offer.

"When I was leaving yesterday I asked her (Marti) if there was anything else she needed," she said.

"She said an air ambulance.