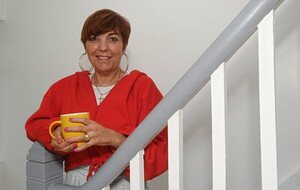 Marti Gorman said her recovering is "going to plan". Picture by Mark Marlow

A WEST Belfast woman who was left fighting for her life after suffering strokes in Portugal has spoken about her continuing recovery.

Marti Gorman (48), a theatre technician at the Royal Jubilee Maternity Hospital, travelled to the Algarve in the summer for a family celebration.

On August 4, she became ill at the villa where she was staying and was taken by ambulance to hospital. A CT scan revealed Ms Gorman had suffered two strokes, which had affected the left side of her body. She was admitted to intensive care and on medics' advice, her elderly parents and two sons were asked to make the trip to Portugal to see her.

However, as her condition improved, her family were told she would only be able to travel home on an air ambulance with a full medical team. After learning this would cost around £40,000, the family launched an online fundraising campaign. After coverage in The Irish News, 247 Aviation Air Ambulance, a private company based at Belfast International Airport, offered repatriation for around £20,000.

On Saturday, August 20, Ms Gorman was flown back to Northern Ireland.

On arriving home, she was admitted to a stroke ward at the Royal Victoria Hospital.

The family said the air ambulance cost around £22,000, adding that once medical expenses were paid, any remaining money would be donated to the Kevin Bell Repatriation Trust, which had donated £5,000 to their fundraiser.

Two months on from falling ill in Portugal, Ms Gorman is now continuing her recovery at home and remains "so grateful" to those who donated to pay for the air ambulance.

Speaking to The Irish News, she said her recovery is "going to plan" though looking back, she remembers very little about what happened.

"I wakened with a sore head and went down the stairs," she said.

"Once I went to put my head down, there was a bad pain and I stood up to be sick. I don't remember anything until my sons and parents came over on the Friday. I had two bleeds on the brain. One had been smaller and then there was this big one."

She said she will "spend the rest of my life" thanking all those who helped bring her home.

"The 247 Aviation team were great. When I was just pulling into the Royal car park, it was like coming home. I just live around the corner so it was as close to home as I was going to get," she said.

Later, on being discharged, she said it was "brilliant just coming into my own house, my own bed and Portugal seemed a long ago".

"I can't fault the Portuguese healthcare. It is just better to be home."

She is now monitored at home by the community stroke team and has an appointment with her consultant later this month.

"I feel very humble and grateful. I can never thank everyone enough. It's not an experience I would ever want to do again. It just shows you the goodness in people too."