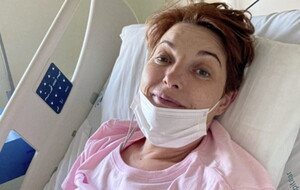 West Belfast woman, Marti Gorman pictured in the high dependency unit at a hospital in Faro after she suffered two strokes when in Portugal for a family wedding

ALMOST £40,000 has been raised in just over 24 hours to bring home a west Belfast woman who suffered two strokes while at a family wedding in Portugal.

Marti Gorman was left fighting for her life a day after she attended the nuptials in the Algarve.

The 48-year-old Falls Road woman attended the wedding on August 1 but had been complaining of a headache. The following day, she became unwell at the villa were she was staying and was taken to a hospital in Faro where a CT scan revealed she had suffered two strokes affecting the left side of her body.

She was admitted to an intensive-care unit in a critical condition. On medics’ advice, her elderly parents and two sons made the trip to Portugal last Friday.

A theatre technician at the Royal Jubilee Maternity Hospital, Marti's condition improved over the weekend with medics branding her a "miracle". Doctors advised Marti's loved ones that it will be at least three weeks before she can leave hospital and even then, she must be flown home by a specialist air ambulance, accompanied by a full medical team.

Laura Gorman launched a GoFundMe page to help raise the money to bring her cousin home when she is well enough.

Speaking to The Irish News, Laura, who remains in Portugal with her cousin, said the generosity of people had left Marti and her family in tears.

"It has been unreal, unbelievable. It is the generosity of people from all around the world," she said.

"We could not believe it. It has been so overwhelming. It just shows you how much our Marti is loved and how much she has done for other people. She is just a brilliant girl. She just cried and cried and cried. She is so thankful and relieved.

"She said `I really can't thank you enough. You saved my life and if you are talking to people, please tell them how grateful I am for everything they have done for me'."

The Anderstonstown woman said she would now be dealing directly with the hospital treating Marti to ask them to "contact the company they deal with for the air ambulance and get an estimated breakdown and that way, we will know what we are dealing with.

"It means the world. We are emotional," she said.

"At least we know the money is there. Once they give the white flag to say she can leave, we are on the plane home".