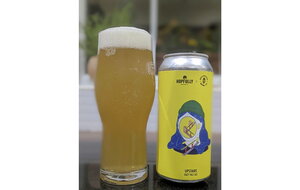 Hopfully and Bullhouse have collaborated to produce Upstairs.

YOU shouldn't have regrets, but most of us do anyway. One of mine (and it's probably not too late to rectify) is that I haven't maintained my level of Irish to the extent that I feel confident enough holding a conversation for any meaningful length of time.

Watching football and hurling matches on TG4 awakens it a bit from time to time, but Google Translate gets a fair touch these days, with the ready admission that it is not without its flaws.

I still possess enough Irish, though, to recognise things like the plural of certain noun and, newsflash, it's not as easy as sticking an 's' on the end of most words as it is in English.

Mo Chara means my friend, but has taken on the equivalent of 'mate' to some casual Gaelige users. It's also the name of a Dundalk-based taproom and online beer store.

They have teamed up with Dublin-based brewers Hopfully to produce a Margarita Passion Fruit Gose called Ar gCairde - a grammatically faithful translation of 'our friends'.

The beer itself is a 4 per cent offering and pours a crystal clear, golden colour in the glass.

It's got some sweet and fruity aromas with a hint of citrus. The sweetness of the passion fruit is up front on the palate, but this is a gose, so the slight sourness and saltiness isn't too far behind. They've used pink Himalayan sea salt to bump up the gose credentials, but it's a nicely balanced number, with neither flavour profile intruding too much.

However, the lingering taste is of sweet and pulpy fruit, rather putting me in mind of a canned fruit cocktail the man from Del Monte may say yes to.

Hopfully have also been looking north for another collaboration. This time they have hooked up with Bullhouse to produce a pale ale called Upstairs.

This one is a more hazy number, leaning over to the New England end of things. It pours a cloudy, light amber colour in the glass with a foamy white head and fires off aromas of tropical fruits and citrus.

It's very drinkable for a 5 per cent pale, with low level bitterness and big juicy flavours, with notes of mango, orange and grapefruit punching through.