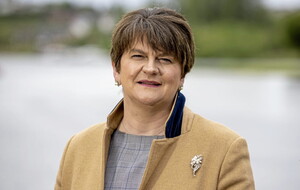 FORMER Coronation Street actor Charlie Lawson has claimed former first minister Arlene Foster asked him to light the Eleventh Night bonfire that he is being investigated for.

The Co Fermanagh-born star yesterday revealed "Arlene invited me down to light" the pyre in Fivemiletown in Roughan, Co Tyrone.

Mr Lawson also said "bring it on" after it was confirmed that he is to be investigated by the Northern Ireland Environment Agency (NIEA) for his involvement in lighting the bonfire.

The actor, who also presented GB News coverage of the Twelfth with ex-DUP leader Dame Arlene, was pictured holding a burning stick to a pyre of pallets on the night of July 11.

Earlier in the day, he had joined Dame Arlene in a "celebrity penalty shoot competition".

But it emerged yesterday that the former DUP leader had asked Mr Lawson to light the bonfire.

Speaking on The Nolan Show, Mr Lawson said: "This was a 50ft bonfire that Arlene invited me down to light the night before we did the GB News on the Twelfth".

He went on to defend the safety on the pyre and vowed that he would do it again, if asked.

"It was totally organised, it was a village do at Roughan, very safe, very family orientated and it was a very jolly night," he said.

"It was a very temperant night."

He added: "There is an awful lot wrong with Northern Ireland if you want to pick holes in it.

"I was invited to light an organised bonfire and I will do it again next year if I’m invited."

Mr Lawson also claimed he had not been contacted by the agency about the probe into his actions at the bonfire, adding "if they want to investigate me, bring it on".

He said he had only been made aware of the investigation by journalists who reported on it.

It comes after the NIEA said it would "consider Mr Lawson's actions in line with our statutory role".

The agency was asked if officials had been in contact with Mr Lawson, but did not respond last night.

Also during the interview yesterday, when asked if he would support legislation around bonfires, Mr Lawson said it would depend on "what the regulations are and who makes them" adding "we all know there are some people who want them totally banned, simple as that".

He added: "It’s part of our heritage and our culture, and that’s going to wind up some people".