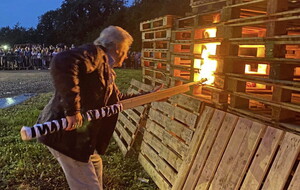 FORMER Coronation Street actor Charlie Lawson will be turning the Christmas lights on at next week's Greater Shankill Winter Festival.

Posting on Twitter yesterday, the presenter of this year's GB News coverage of the Twelfth said he was "delighted" to be invited to turn the lights in his capacity as this year's "Mayor of Greater Shankhill (sic)".

The Friday December 2 festival features a community choir, a parade, a fun fair and Christmas market.

Earlier this year The Irish News revealed that the 63-year-old Enniskillen-born actor, who gained fame for playing Jim McDonald in Coronation Street, was facing an Environment Agency probe for lighting an Eleventh Night bonfire in Fivemiletown, Co Tyrone.