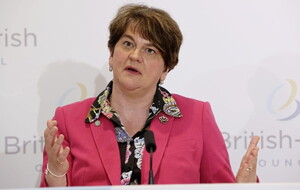 ARLENE Foster has hit out the "demonisation" of Eleventh Night bonfires after the Environment Agency said it is investigating former Coronation Street actor Charlie Lawson for lighting one.

The actor responded yesterday after The Irish News revealed the investigation.

"Both my agents, both in London and home, have been approached by The Irish News and the Environmental Agency about the lighting of a bonfire containing waste," he tweeted.

Another message read: "Roughan Orange Lodge bonfire. To whom it may concern. Small, organised, no effigies, no flegs, no offence."

Mr Lawson was photographed in Fivemiletown on the night of July 11 holding a burning stick to a pyre of pallets.

Dame Arlene later hit out at The Irish News's story.

"The demonisation by the nationalist press continues," she tweeted.

DUP MLA Deborah Erskine tweeted: "Really absurd that this event is being targeted. A family event. No sectarianism in sight."

The NIEA said it would "consider Mr Lawson's actions in line with our statutory role".

In 2016, the NIEA investigated former First Minister Paul Givan after he was pictured lighting a bonfire.

The DUP Lagan Valley MLA, who was Communities Minister at the time, was given "advice" as part of a "proportional response".

The Department of Agriculture, Environment and Rural Affairs (Daera) said NIEA had "carefully considered the evidence available" and the "circumstances of the incident".

"Consistent with our enforcement policy a proportional response was taken," it said.

"This involved an advisory approach, providing advice to the individual involved, to make it clear that the lighting of bonfires, which contain controlled waste, is an offence."

It added: "NIEA is clear a person who lights a bonfire containing controlled waste, e.g. tyres, is technically committing an offence of treating the waste (by burning) in contravention of the legislation."

Last year, Stormont's Commission on Flags, Identity, Culture and Tradition recommended that wood for bonfires should be made exempt from being regarded as controlled waste.

The recommendation would allow wood-only bonfires to be lawful where landowners give permission.

The report was published without Stormont agreeing an action plan on implementing any of the proposals.