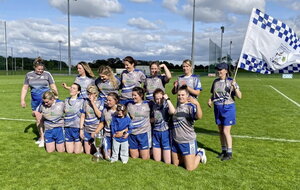 IT was the death of a revered woman which inspired the revival of the Erne Eagles rounders club, with their men now back as the kingpins of GAA rounders.

Ollie Fitzsimons and his colleagues from Mullahoran in Cavan may have felt there were 'no more worlds to conquer' after they completed a 10-in-a-row of All-Ireland Men's triumphs in 2007, then regained the title in 2009.

Life intervened, and their involvement with rounders faded away – until the death of the inspirational Dympna Reilly, recalls Fitzsimons.

"The ten in a row that we had, a lot of us said that it was time we focussed on families, a lot of us got married.

"Dympna was the person who kept the club going when everyone else had kind of backed away. Dympna was the leader of the whole lot, she did so much work behind the scenes. Sadly she died in 2018.

"After the passing of Dympna Reilly, we decided to come back, the original team, to see could we do it again."

They certainly could. They won the Aodh Rua Cup that very year, and with calm understatement, Fitzsimons notes: "We've won it three times since that."

On Sunday at the GAA's National Games Development Centre at Abbotstown, north county Dublin, the Eagles retained their crown with a second consecutive final victory over Monaghan's Carrickmacross Emmet's, who had defeated the Mullahoran men in the 2020 decider.

Fittingly, though, Erne Eagles won the Senior Mixed title in 2020, becoming the first winners of the new Dympna Reilly Cup, and they retained it last year, although the Cuchullain club from Carlow won it at the weekend.

Fitzsimons had been player-manager last season, but hung up his bat this year after an illustrious career. "I was part of that [10-in-a-row] team, the part of the comeback in 2018 as well. It's an honour to be here in this position.

"Rounders has been a thing since I was probably six or seven years of age, and I'm now 45. Erne Eagles is very strong, underage is coming on so well at the moment. We have underage teams in the community games in Limerick next weekend, so the future looks very strong for the club."

The Cavan men were far too strong for their rivals from Carrickmacross in the Men's decider at Abbotstown on Sunday, running out easy 24-6 winners. Superior in every aspect - pitching, batting, catching, and fielding - they cruised to victory, boosted by scoring six runs in the fourth innings and eight in the fifth.

The Eagles' professionalism was evident, including having their own 'bat boy'; one day his dream will surely come true and he'll become 'bat man'.

Fitzsimons, though, is insistent that the Eagles cannot rest on their mound of laurels, looking down imperiously on the rest: "Look it, we're not unbeatable, we had a loss during the year to Cuchulainn's [from Ballon in Carlow], they got us fair and square. We're not unbeatable – but we're there all the time for any team to give it their best shot if they feel they can do it.

"There are more new clubs and the game is more competitive now than ever it was. The competition, the fitness and skills of the game, all have improved immensely in the past five years."

The female side is on the rise too. Bagenalstown of Carlow and then Glynn Barrtown of Wexford had been the top two until Breaffy brought the 2020 All-Ireland to Mayo – and then regained the Ladies title on Sunday after a victory for Adamstown of Wexford last year.

Breaffy beat a young Bagenalstown team in the final, on an impressive 28-9 score-line, and the winning captain Avril Coyne was delighted with that end to a perfect season: "We were raring to go this year again after losing in last year's semi-finals. We went undefeated this year in the Championship, we have won all our matches – I think we're the only Senior Ladies team to do that, which is as great achievement for the club."

With many of their members having previously played for Castlebar, who dominated the Ladies game in the late Eighties and early to mid-Nineties, Breaffy only branched out on their own in 2017, led by Colm Jordan.

"The lads push us on, they really make us work hard. We got to the Mixed semi-finals this year, unfortunately we didn't come out on top against Glynn Barrtown, but the club is doing great."

Breaffy may be known for its famous footballing sons, notably the O'Shea brothers, Aidan and Seamus, but Coyne laughed that the rounders ladies can show them another All-Ireland trophy, joking, "We'll have to drive past the house.

"If we could bottle the feeling of happiness we have now… we're so over-joyed with it."