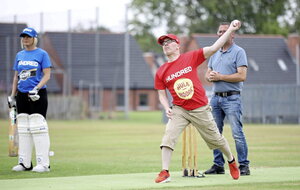 THE hugely enjoyable inaugural Irish Hundred game at Muckamore Cricket Club, backed by sponsors KP Snacks, ended in a controversial tie which is set to be investigated by the ICC.

With teams made up of members of the media, influencers, and marketers, the Reds/ Hula Hoops side had run rings around the Blues/ so-called Real McCoys for much of the match before some cynical gamesmanship from the strugglers saw them almost steal an unlikely, utterly undeserved victory.

Happily, sporting justice was done when the Blues' star batter, professional Sam Gordon, was trapped absolutely plumb LBW, having scored more than half of his team's total of 108 for nine wickets.

The Reds had also scored 108, in a magnificent all-round team display, but only lost three wickets as the bumbling Blues attack toiled to make much headway against their (mostly) masterful batting.

Indeed, so dominant were the Reds that they sportingly changed their batters on a regular basis to ensure that everyone had a go – but that honourable approach also prevented their best players from staying on and precluded anyone from 'getting their eye in'.

In contrast, the win-at-all-costs Blues cunningly kept star left-hander Gordon in reserve until he could not be replaced. He transformed a procession towards a rampant Red victory, with the score at 44-8, with a series of flukey slices and fortunate blocks to the boundaries/ a masterful display of batting (delete as per your bias).

The Reds would have been robbed of their fully deserved triumph except for that LBW at the end, although the ICC is understood to be looking at the match video after allegations that many of the wides bowled by the trundling Blues bowlers were not counted by the somnolent scorers.

The match served as a launch for a Northern Ireland only campaign by KP Snacks, official team partner of 'The Hundred' cricket competition, for cricket clubs to win a £1,000 prize.

To be in with a chance of winning, clubs are asked to visit KP Snacks NI on Facebook or email kpsnacksni@duffyrafferty.com and explain why they deserve to win this money and what they want to spend it on – making sure to include contact details and cricket club address. Closing date is Monday September 5, 2022, with the winner to be announced a week later.

Ricky Watts, business account manager (Northern Ireland) for KP Snacks Ltd, said: "Our partnership with The Hundred is underlined by our passion to build interest and get people active through cricket, which in turn can have a positive mental and physical impact on those who play.

"As part of our partnership with The Hundred, we are also delighted to offer local cricket clubs in Northern Ireland the exclusive chance to win £1000 to help buy them equipment or whatever they need.

"We're living in difficult times right now and we know that this would be a real boost for any local club out there, no matter what level they play at."

Earlier this year, KP Snacks launched a national on-pack promotion to give the wider public an opportunity to win thousands of cricket-themed prizes, including bats and balls, sports bundles, gift cards and tickets to The Hundred final through a series of promotions.