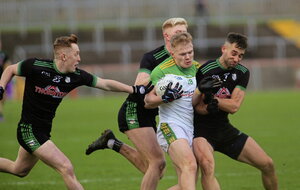 THE scoreboard operator at Healy Park perhaps couldn't believe that Glen had actually won this match by five points, with the display still showing their two-point lead before Danny Tallon's last-kick penalty conversion.

Cargin had hung on, kept the contest alive until added time, but then one moment turned the momentum and it was the Maghera men who held on and on and onto the ball before creating the opening which forced the Antrim champs' goalkeeper John McNabb to concede that late spot-kick.

Tallon's confident low strike took his contribution to 1-4, but that tally included only one point from play.

It was that sort of game: tense, tetchy, tactical. Some might say it was like what one of the ground staff had to shovel off the pitch from several spots before throw-in, but you couldn't take your eyes off this contest.

Unlike the irresponsible dog-owners, Glen know how to hold onto a lead, know how to get down in the dirt and get the job done.

Yet Cargin still pushed them all the way, even if the Toomebridge men never managed to force themselves ahead.

Indeed, although the underdogs were only level once, at a point apiece for one minute early in the game, they were never trailing far in Glen's wake.

The Derry kingpins only led by three points for a similar timescale on two occasion, late in both halves, before Cargin came back at them and left Glen worrying about conceding a goal.

Paul McCann reduced the deficit to two points again just before the hour, at 0-10 to 0-8, and Cargin had put themselves into position for more late drama – until the hand of fate went against them.

Michael McCann, who'd battled for every breaking ball in the central killing zone, before moving further up the pitch in the second half, won possession as the game entered three minutes of added time – but then conceded a foul, and Cargin barely got their hands on the ball again.

Cargin manager Ronan Devlin bemoaned that incident, reflecting: "The killer was, we won a massive turnover. Mick just went to push the man off and happened to catch him high. I don't think we had the ball in our hands after that, and that might have been three or four minutes.

"At that stage, Kobo's point was brilliant, it gave us a lift. And there was two in it at that time, just felt we could pin them in. But that killed the clock, it was totally accidental and that's the way it is."

In truth, the Maghera men had responded well to that score Devlin mentioned from Kevin O'Boyle, which had left just one between the teams, with Glen midfielder Emmett Bradley converting two frees having missed one and shot wide from play minutes earlier.

Wayward shooting was a factor in the tightness of this match, with nine wides from Glen men compared to just six from Cargin.

Glen's misses also included two decent goal chances – the first involved full-back Ryan Dougan in the 23rd minute, but from a narrow angle he could only shoot against McNabb.

The much better opportunity came early in the second period, when midfield colossus Conor Glass won a Cargin kick-out and supplied Ethan Doherty. His brother Jack took his hand-pass superbly on the run and continued the family affair, slipping it to third sibling Alex – but he dragged his shot wide of the near post.

Yet those sights of goal were anomalies in a dogged affair. There were a few late hits, plenty of pushing and shoving in the middle third, but this was a match which never caught fire in any regard.

Appropriate adjectives for both teams from the outset would have been Cargin 'aggressive' and Glen 'defensive'. The latter sitting deep and in numbers meant the Toome men had plenty of the ball, which suited their purposes as they won the toss and decided to play into the breeze.

Glen were forced to take off wing-back Eunan Mulholland, after a collision with big Pat Shivers, sending on Adam McGonigle, but their pattern of play remained patient, probing, but rarely finding gaps.

There was not a single score from play before the break from Cargin but they undoubtedly were very happy with the scoreline against that strong breeze – albeit one that was cross-field.

The Maghera men had looked reasonably well-placed late in the first half, leading by five points to two after 25 minutes, but Cargin narrowed the gap to the minimum margin with further frees from Tomas McCann and Shivers.

Cargin 'keeper John McNabb was driving his kick-outs long, despite the wind, and even came up to strike over a long range free himself.

The game remained much the same, especially after Glen failed to open up a gap by netting a goal, although Glass's reading of McNabb's longer clearances after the teams turned around set up a few attacks.

There was always the lurking fear for Glen that Cargin would conjure up a late goal, as they had done in the quarter-final against Naomh Conaill of Donegal, but the back-to-back Derry champs had enough quality to see them through to a first ever Ulster SFC Final.

All-Ireland title-holders Kilcoo await, and Glen must be much better on December 11, but, whether it was by two points or five, they merited their progress yesterday.