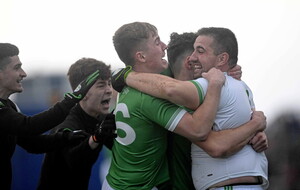 MOST observers may be giving Cargin little chance of upsetting the Glen applecart, but Michael Warnock knows from experience that the Derry champions will have their hands full when these clubs collide in Sunday’s Ulster semi-final.

Close enough - in geographical terms - for there to be a level of familiarity between the two groups of players, it is Cargin who go in as the more experienced outfit in Ulster terms after claiming six of the last eight Antrim titles while Glen only conquered Derry for the first time in 2021.

Making the breakthrough on the provincial stage was another matter entirely, though, as year upon year the Toome men came up short. That was until, earlier this month, a Naomh Conaill side expected to seal a last four spot came unstuck after penalties on a dramatic day at Corrigan Park.

The Donegal champions’ exit came as a shock to many but not to Warnock, who knows exactly what awaits at Healy Park on Sunday.

“That’s a huge victory for them against Glenties - they showed serious character to get over the line,” he said.

“We played them in a friendly three or four years ago and they absolutely tanked us, so that’ll be fresh in our mind. Any game you get in Ulster, it’s just a different step up from what you get in your own county.

“We learnt that last year – the Scotstown game up here, Letterkenny, the first 10 minutes, we were just like, woah, it’s a different level and you’ve got to be on your game to get through.

Against the Tyrone champions, Glen finally clicked into gear after a kamikaze opening half an hour that was brilliant and bizarre in equal measure. Trailing by three at the break, Malachy O’Rourke’s men soon found a groove, stifling Errigal’s scintillating attacking style and taking over the scoreboard.

Crucial to the assumption of control was Warnock’s man-marking job on teenage sensation Ruairi Canavan who, alongside elder sibling Darragh, lit up Celtic Park at times.

Warnock has already proved himself a man for the big occasion too, and the 29-year-old believes pitting his wits against top quality operators such as the Canavan brothers can only make him a better player.

“I’m glad to see the back of them to be honest,” he smiled.

“They’re two phenomenal players – even though they’re playing against you, you have to applaud good quality football at times.

“You want to pit yourself against the best. If those guys come out on top then so be it, but it was a great battle. The two Canavans will be the top five, top 10 forwards in Ireland in the next couple of years – it’s surprising Darragh hasn’t got more games with Tyrone when you see his speed and his creativity. Maybe that’s gone out of the game a bit and managers need to bring it back in.

“It’s nice to play against them when you reflect back on it, not so nice when you’re running after them.”

Having overcome that obstacle, Glen return to the semi-final stage again, where last year’s journey came to an end at the hands of eventual Ulster and All-Ireland champions Kilcoo.

The Magpies are on the other side of the draw, taking on Enniskillen Gaels on Saturday evening, with many anticipating a rematch in the provincial decider this time around.

And Warnock admits the Glen players had to park last year’s extra-time defeat, rather than getting caught up in what-might-have-beens as the Andy Merrigan Cup made its way to Kilcoo.

“Kilcoo had three more steps, they took those three steps and fair play to them. We tip our hat to any team that wins an All-Ireland. They’ve been on the road a long time, that was their aim, and our aim is to try and get back there this year.

“We’re in an Ulster semi-final again, we want to go a step further.”