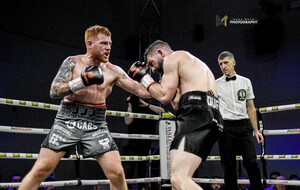 BRUISED but smiling from ear to ear, Colm Murphy retained his Boxing Union of Ireland Celtic featherweight title with a points win over England-based Liam Gaynor on Saturday night.

Murphy has a terrific engine and there were signs of improvement from the Dee Walsh-trained ‘Posh Boy' over eight rounds against Dubliner Gaynor who was solid and had some good moments but not enough to win the fight.

Murphy has just six fights behind him and has won, and now defended, his Celtic featherweight title and, although he is not yet the finished article and can lose his shape at times, his defence is tightening up and his punch output is very high.

“I'm going home black and blue as usual but that's how I like it… sometimes,” said Murphy who had a nasty swelling over his right eye after eight action-packed rounds.

“I gave him the first round to be fair but then I upped my game and I don't think I would have got the win without Dee (Walsh), the best coach in Ireland, in my corner.

“He guided me to that win. He was telling me from the second round not to step out with the jab and that was how I kept the range and I was starting to land power shots. Usually I am more of a volume puncher but I was really landing the power-shots and that's what won me the fight.

“I think I'm improving. That was my second eight-rounder and I was definitely fitter than my opponent. I feel like I got the weight right really well so I'm going to go and write this all in my journal and next time I'll be even better prepared.

Murphy's win made it 3-0 for Dee Walsh's gym on Saturday night. Owen O'Neill won the Irish super-welterweight title with a devastating last round knockout against Cavan's Duffy and Conor Quinn claimed a first home win with a stoppage victory over Mikey Young.

Quinn, who had been held to a disputed draw in his home debut last time out, left nothing to chance against Young and, when his opponent smiled after Quinn had tagged him with a stinging right hand, the Belfast youngster went in for the kill.

A sustained, two-handed barrage hastened referee Hugh Russell junior to call a halt to a one-sided contest 2.33 in the second.

Quinn lost his grandfather early last week and, understandably, says he was “all over the show” for a few days. After the funeral his mind returned to boxing and he showed what he is capable of with an assured and skilful display.

“I didn't understand the scoring the last time so I didn't want to leave it to the scorecards this time,” he said.

“In his last few fights Young has fought undefeated prospects like myself – a couple had come from the Great Britain team – and no-one has ever stopped him. I said to Mark (Dunlop) and Dee: ‘I want to stop him' and I felt like I was going to - from the first jab I hit him I knew it was only a matter of time.

“I landed a big shot in the second round and he smiled. It was a smile of: ‘I don't think I have too much longer left here'. I knew that, I've been in this game long enough to know when you've hurt someone and if someone smiles when you punch them you know you've hurt them.

“To stop someone who's never been stopped… He brought a lot out of me because it wasn't just one or two punches, I think I hit him with about 200 punches in two rounds and I was showing different variations – a couple of times I switched southpaw and hit him with some big shots.

“It's a great way to end the year and I can't wait for whatever's next.”

DEBUTANT David Ryan really caught the eye on Saturday night with a composed boxing display that was too much for experienced journeyman Bryan Mairena.

The Nicaraguan had given Colm Murphy his fill of it at the Europa Hotel during the summer and went on to beat English prospect Frank Arnold at York Hall in September. He went after Ryan from the first bell but the former kickboxing champion displayed excellent movement and accurate counterpunching and he put together a very impressive win over four rounds at Girdwood Community Hub in North Belfast.

Limerick City-raised Ryan started boxing at the age of eight but he gave up the sport when his family moved to Shannon where there was no boxing club. He transferred his talents to kickboxing and won titles all the way up to senior level as an amateur and then turned professional.

After winning Irish, European and World honours he decided he wanted a new challenge and, since he always felt he had unfinished business in boxing, he opted to give it another try a couple of years' ago aged 25.

“There was nothing left to win as a kickboxer,” he said.

“I'd won everything as an amateur and a pro so it was good to get something different. The fire was kind of going with the kickboxing and I thought: ‘Do I really want to keep doing this? What else is there to win?' Boxing is a whole different world – you could fight every weekend if you were really up for it and you can make a living out of it.

“It's a different lifestyle, you have to look after yourself and I like it.”

Mairena was stepping up in weight. He fought Murphy at featherweight and was super-lightweight on Saturday night but Ryan's corner were delighted with their man's performance. He showed slick skills, sharp reflexes and picked his shots under pressure and he feels there is better to come.

“I was meant to fight a different opponent but this guy was the only one available so I said: ‘Why not?' I was expecting to fight a lot better – I hadn't fought in three years' and it showed really. Some things weren't there, I saw shots and tried to throw them but I was mile off.

“But it was good for being out of the ring for so long. I've got a great team behind me and they'll push me as far as I can go. I'll fight anyone, I don't care who's in my weight class; I'll fight them.”