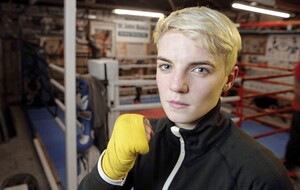 THE blood of champions Jimmy and Billy ‘Spider' Kelly (his great-grandfather and grandfather respectively) courses through Connor Coyle's veins and he intends to add to the legacy of his famous Derry boxing family when he faces England's Felix Cash for the WBA Inter-Continental middleweight title on Saturday night.

Coyle and Cash collide as chief support to the mouth-watering meeting of another family affair as Chris Eubank junior and Conor Benn reprise their fathers' legendary rivalry in the early 1990s at London's O2 Arena.

Cash is 15-0 with 10 stoppage wins and is the local favourite while Florida-based Coyle will be fighting in the UK for the first time. Coyle fought just two weeks' ago in Tampa but insists he has fully recovered for a shot at stardom.

Rated nine in the WBA rankings, Coyle beat Silverio Ortiz (27-31) on September 17 in Tampa. He won an eight-round unanimous decision and then returned to the gym to focus on the gameplan for Cash.

“It's a good opportunity for me to perform at a good level on a good platform,” he said.

“I had to get through the fight in September with no injuries before I signed the contract for Cash and I got through it well, everything went smoothly and training has gone very well for this fight. I basically went from one camp into the next and I'm feeling sharp. My head is in a good place and I feel good, I got a good victory over a tough Mexican veteran I got some good, solid rounds and I did what I needed to do to get the victory so I'm coming into this fight confident.”

His opponent Cash is stylish, bordering on flash, with slick skills and two-thirds of his opponents haven't been able to go the distance with him. Coyle will be the ‘away' fighter on Saturday night but this is a terrific opportunity for him to grab centre stage.

He intends to take it.

“He's in the top 10 in the world so anyone with that ranking is going to be a very dangerous fight,” he said.

“He has a good style but I feel I have a bit more ability than him in my footwork and things like that. The assets that I have are going to be more than he has on the night and I think my boxing ability is at a higher level than his.

“I know what I can do and when you're fighting at this level everybody can pack a punch but I've been sparring with light-heavyweights, very big punchers, so it's nothing that I haven't dealt with before.

“I expect he'll bring out the best of me because this is a huge fight. We've put a plan together that will work to our advantage and take my career to the next level.”

Former Oak Leaf ABC star Coyle had a couple of outings in Dublin early in his pro career but since then he has been based in the USA and Mexico. Beating Cash will give him an excellent platform on which to build a new fanbase closer to home.

“My plan now is to fight more in Ireland and the UK,” he said.

“I want to fight somewhere that my fans can buy a ticket and come to watch me instead of being based in the US. I'd like to have a lot more fights closer to home for the rest of my career but my team is US-based so I will still have fights in America.

“Saturday night is my opportunity to show everyone what I can do on a huge network. I just have to go out and do what I do best, really show up on the night. The winner of this fight will be close to a world title shot and my aim in boxing is to be a world champion, that's my goal.”

Before he left for London, Coyle faced an unexpected challenge from Mother Nature when Hurricane Ian tore through Florida.

“I'd never seen a hurricane before because we don't get storms like this at home,” said the Derry man.

“There were trees that tore out of the ground and landed on houses a few doors down here in Pinellas Park, so we were very lucky to have no damage or any interruptions in training. My thoughts are with everybody in Florida impacted by Hurricane Ian.”

KRISTINA O'Hara returns to action in the ‘Women of Steel' card in Sheffield on Friday night.

The BBC will broadcast the bill - their first-ever professional women's boxing action - live on the iPlayer.

Lauren Parker will headline the event when she takes on Mexico's Esmerelda Sagahon for the vacant IBO Intercontinental title while 2018 Commonwealth Games 48kg silver medallist O'Hara features prominently on the undercard.

The Belfast minimumweight has impressed in her two fights to date. Her debut was a point wins over Maira Dayana Loyola and she followed it up with a composed victory over Camila Erica Avaca in April.

"Everything has gone according to plan," said O'Hara, who will box her first six-rounder wearing a gumshield that will produce punch and power stats for viewers.

"We had a fight postponed in September so we've been getting more rounds of sparring with Padraig Downey in our club and Nicole Clyde up in Antrim so the extra time has been beneficial for us. I've been doing lots of sparring and running and a lot of technical work in the gym. It has been good so I'm ready to get in the ring."

JAMES McGivern scored the first stoppage win of his professional career two minutes and 10 seconds into round five against Luis Montellano at the Kid Gloves Gym in Simi Valley, California last weekend.

“This has been a whole new experience for me,” said McGivern.

“From the get-go here, it has been a real learning experience. Your man was tough, but I felt pretty good.”

Despite forcing the stoppage, ‘The Natural' wasn't entirely happy with his performance.

“It was pretty good but it's still not me at my best,” he said.

“I thought it was going to be over in the first round. He was wobbled but, to be fair to him, he weathered the storm. I've been working a lot on things since I came over here.

“From my amateur days, I've been fighting very high-paced but we've done some work on fighting calmer and slower and throwing more shots with a bit of venom. It wasn't at 100 per cent but I'm delighted with that night's work.”