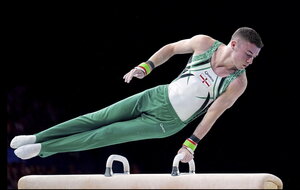 Rhys McClenaghan demonstrated his resilience to bounce back from disappointment in Tokyo and remain on the horse when the going got tough in his Commonwealth Games final. Picture by PA

THE TV cameras were placed high in either corner of the tented mixed zone area out the back of the Riocentro pavilion that hosted the 2016 Olympic boxing competition. For all the places synonymous with the best days of Irish sport, Riocentro is easily identifiable with a handful of the worst.

Perhaps the writing was on the wall from the start. Situated in the utterly soulless Rio suburb of Barra, miles from anywhere or anything, South American soccer expert Tim Vickery summed it up best when offering his advice prior to that Brazilian adventure six years ago.

“Riocentro is an absolute bastard,” came his stark reply, “it’s some kind of cruel joke that it’s name includes the word centro at all…”

It was here that news first broke of Michael O’Reilly’s failed drug test on the eve of the Games. It was here that an ashen-faced Katie Taylor sobbed silently into her towel, trying to find the words to describe a heartbreak that ran so much deeper than disappointment in the ring. And it was here where Michael Conlan ripped off his amateur vest for the last time, face contorted with fury as he flipped the bird at ringside judges whose treachery cost him a second Olympic medal.

Yet there is another afternoon that springs to mind any time Riocentro, or resilience, is mentioned.

Shakur Stevenson, the American teenager who Conlan would/should have faced in the semi-final, eventually lost out to the classy Cuban Robeisy Ramirez in the bantamweight decider.

Ramirez was the reigning champion having topped the podium in London four years earlier, beating Conlan along the way. There was no shame whatsoever in losing to him - yet Stevenson cried, and cried, and cried.

Like the west Belfast man, his emotions were laid bare on national television as he struggled to force out any words between the tears. The screens in the mixed zone tent captured it all from yards away. Before that day, the Newark stylist hadn’t lost a competitive bout as an amateur boxer. He didn’t argue the decision, admitting his opponent was a deserved winner.

But losing was an entirely new experience, and it told.

The charismatic Ramirez was smiling and joking with journalists on the other side of the fence when Stevenson eventually walked into the mixed zone. With former Irish coach Billy Walsh at his heel, there would be no stopping, no more interviews. Instead, face crumpled in pain, the uncontrollable wailing continued until he was out the other side of the tent. It was a sound, and a sight, that stays with me.

Shakur Stevenson is now a two-weight world champion and, at the age of 25, undoubtedly one of the pound-for-pound best in world boxing. Often when he posts on social media, faceless fight fans will reply with a screengrab of him crying in Rio, or a YouTube link to that harrowing interview.

Hurt, though, has helped him to where he stands today. The desire never to feel that way again – allied to the precision of a surgeon - has propelled him to the top of the tree, and he is well on the way to becoming an all-time great.

Conlan has a similar tale. As an 18-year-old with the world at his fists, he went to the 2010 Commonwealth Games convinced he could win gold. Second best has never been an option for a man born to box.

Conlan slipped away from the fuss at Belfast City airport, making a hasty exit into the waiting arms of dad John and mother Teresa, the entire car journey home spent in tears.

Within five years Michael Conlan was Commonwealth and European champion, Olympic bronze medallist with sights set on an upgrade, eventually becoming the first-ever Irish male to land gold at the World Championships. At the SSE Arena tomorrow night he bids to get his professional career back on track against Miguel Marriaga in the wake of knockout defeat to Leigh Wood back in March.

John Conlan – now Ulster High Performance director - sees a fair bit of his own son in Dylan Eagleson, the Bangor teenager who is in the mix for Commonwealth Games gold this weekend after opening his account in Birmingham yesterday.

Eagleson has been one of the worst-kept secrets in Irish boxing for some time, his ascent into the public consciousness temporarily halted by the Covid-19 pandemic until, in his first-ever competition at elite level, he became a European silver medallist in Armenia.

Conlan wasn’t part of the coaching team in Yerevan, instead following the competition from afar. In the final, Eagleson was well beaten by France’s skilful Billal Bennama, taking a standing count along the way. Used only to winning, like Stevenson, defeat stung.

Checking in to see how the 19-year-old was in the days after, Conlan got the answer he wanted.

“The Italian and French guy were in the other half of the draw from Dylan, one of the coaches rang me and says ‘he destroyed the Italian [at a training camp] in Assisi, I hope the Italian wins’, but I wanted the French guy to win because he’s a harder fight.

“Don’t go against someone you know you can beat, you need that higher challenge. Afterwards when I rang and asked how he was, he was crying his eyes out, very upset and I thought ‘brilliant’. Because now he needs to know where he has to go.

“Everything happens for a reason, I believe, and losing is a massive part of learning. That’s what I loved about Dylan’s reaction in the Europeans.

“He was completely devastated for two or three days, eating shit food, feeling dejected, and I sent him a message to say it’s part of the journey – you can lie in bed and cry about it or say ‘what am I going to do to improve?’”

Resilience comes in many forms, and how sportspeople respond to disappointment ultimately makes or breaks them.

Look at gymnast Rhys McClenaghan earlier this week – midway through his routine a minor slip sent him off kilter, forcing the Newtownards man to react in a split second.

A year earlier, McClenaghan’s Olympic dreams ended in devastating fashion when he slipped from the pommel. In Birmingham on Monday, he salvaged Commonwealth silver when all could so easily have been lost.

Experience, resilience when the pressure was at its height saw McClenaghan through, and the rest of his career will be all the better for knowing he has that in his locker – because, to reach the top, there is no choice other than to get back on the horse.