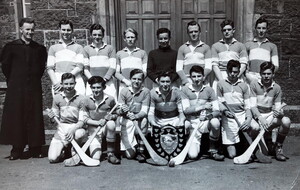 The Danske Bank Mageean Cup final on Friday is unique in that it will be the first time none from St Patrick’s, Maghera, Cross & Passion Ballycastle nor St Mary’s, Belfast will feature. It is also therefore the first ever meeting of St Killian’s Garron Tower and St Louis, Ballymena in a final.

This will be just the second time that St Killian’s have contested the final of the blue riband event in schools’ hurling. However, before St Killian’s emerged from the amalgamation of three schools on the east Antrim coast, St MacNissi’s College on the Garron Tower was closely linked to the establishment of hurling in Ulster schools.

Almost exactly a century after Lady Londonderry constructed her summer residence on a ledge overlooking the Sea of Moyle, the Diocese of Down and Connor purchased the site to open a second diocesan seminary as St Malachy’s College Belfast had become overcrowded.

Garron Tower is surrounded by Glens hurling clubs Cushendun, Cushendall, Glenariffe and Glenarm where young lads who would become 'day boys' would take their hurl with them everywhere they went on the small farms in the area. There would be hurls in the new school that opened in 1951 and this triggered the start of inter-colleges’ hurling competitions the following school year.

Although many of the Christian Brothers’ schools played hurling at different levels prior to 1952, only St Malachy’s and St Mary’s CBGS, Belfast were pushing for a competition. Now with the addition of a third school and occasional participation from the Red High in Downpatrick and other schools, the Ulster Colleges’ Council was encouraged to start a hurling competition on the same basis as the MacRory Cup that had been running for a quarter of a century at that point.

For the first 11 seasons the prize was the Ulster Senior Shield and for five of those 11 seasons St MacNissi’s, Garron Tower were the outright winners. They also shared the 1954-55 and 1958-59 titles.

In those years, the competition was played on a round-robin basis with no final; whoever won the league, collected the Shield. For a couple of years only St MacNissi’s, St Malachy’s and St Mary’s CBGS entered and therefore each team played home and away.

In the early years it was played in the summer term until St MacNissi’s and St Mary’s CBGS lost to each other in the summer of 1955 and, as there was no time to fix a play-off due to exams, two sets of medals had to be presented.

The following season, the Colleges’ Council gave the competition a time-slot – September – so that it would be done and dusted before the MacRory Cup started. However within a couple of years a second title had to be shared by St MacNissi’s and St Malachy’s.

The pair were supposed to play a winner-takes-all final game on October 9 1958. However, Pope Pius XII died that week and the two diocesan colleges of Down and Connor were directed to postpone the match. The MacRory Cup started immediately after the papal funeral and a time-slot couldn’t be found for a rematch for the hurlers.

Sadly that was the end of St Malachy’s as a force in hurling, but St MacNissi’s went on to win the title for three years in a row 1960-62, the first and last captained by the McCamphill brothers, (Fr) PJ and Séamus with Francis Connolly in the middle.

Others to feature in those teams included future Antrim footballer Oliver Keenan and county hurlers Eneas Black, Kevin Donnelly and Brian Thompson. Brian would later go on to coach teams in Cross & Passion and the Thompson Shield is presented in his memory after his un-timely death around 15 years ago.

The death of Bishop Mageean in 1962 prompted the students of Dromantine College outside Newry to present a Cup in his honour and it was to replace the senior shield for the 1963-64 season. Except that it didn’t.

The Mageean Cup wasn’t yet available when the final game of the round robin series was played on October 12, 1963 in Casement Park. St MacNissi’s beat St Michael’s, Omeath by 5-6 to 2-1 and, as they had it from the previous year, the senior shield was presented to the winning captain Oliver Keenan.

1963-64 was also the first year that the Ulster senior champions represented their province in the Croke Cup, the semi-final of which was played in Croke Park on April 19, 1964. St Peter’s, Wexford beat St MacNissi’s by 8-7 to 2-5 with Eneas Black (1-4), Colm Donnelly (1-0) and Eddie Donnelly (0-1) scoring for the Ulster champions.

Prior to their visit to Dublin, a team photograph was taken in Garron Tower. It is the first time that the Mageean Cup appears in front of a winning team. Incidentally the Senior Shield was also placed in the team photograph and that marks the last photograph of the Shield after 11 years as the top prize.

Sadly that was also the last time that the Mageean Cup was to visit Garron Tower.

Brian Rainey, who featured in goals for the Tower in both the 1962 and 1963 teams, transferred to St Mary’s CBGS to become a day pupil the following year and he was a key member of the first team from the Glen Road to win the competition outright. He remains the only player to win Mageean Cup medals with two different schools.

Rainey also won a Rannafast Cup medal with St MacNissi’s in the 1963-64 season and that football success was probably one of the reasons the Tower’s hurling fortunes took a dip. The boarders had always favoured football over hurling. With success in the Rannafast, assisted by some hurlers including Eddie Donnelly, they went on to contest MacRory semi-finals on a couple of occasions in the years that followed.

Meantime St Mary’s became a force in hurling and won the next 15 titles in a row, collecting All-Ireland B titles in 1971 and 74. The 1969-70 season was the only one in which the Tower came close to breaking the sequence.

They beat St Mary’s in the first game of that series, but lost the final game to the Red High in Downpatrick. That meant a three-way play-off. The Belfast side took advantage and defeat-ed the Tower in the 'final' in Loughgiel by 8-7 to 4-3. Incidentally current Bishop of Raphoe Alan McGuckian wore the purple and gold in that final.

Hurling dipped dramatically after that in St MacNissi’s. With St Louis', Ballymena and Cross & Passion becoming co-educational, boys now had a chance to attend schools in their own area instead of boarding or making the longer bus journey to the Antrim coast. Boarding numbers also declined and for close on a decade, St MacNissi’s couldn’t field a senior team.

They came back into the Mageean in the mid-1980s with a team that included, among others, BBC Sports presenter Mark Sidebottom. Under the stewardship of Tommy Lismore they gradually build at underage level and launched a bid for the top prize in the early 1990s only to lose three successive finals, the first to St Mary’s and then two in a row to Maghera.

Those teams included future Antrim star Conor “Monty” McCambridge and also Pádraig McIlwaine and Michael McAlister who returned to their alma mater as teachers and are in-volved in the current Mageean Cup bid.

There were only two further appearances by St MacNissi’s in a final. The first came in 1995 when they came up an agonising two points short of St Mary’s Belfast with a team that fea-tured Karl McKeegan, Johnny McIntosh and Micky 'Monty' McCambridge.

A decade later Neil McManus, Aaron Graffin, Paddy McGill and Darren Hamill were in the team that was convincingly beaten in Casement Park by St Patrick’s, Maghera who went on to bring the All-Ireland O’Keefe Cup to Ulster for the first time in 32 years.

St Killian’s began life in the Casement Cup which they collected in 2011 and five years later they made their only appearance in a Mageean Cup final going down heavily to St Mary’s Belfast.

Perhaps FridayDecember 9, 2022 will bridge a 59-year gap and see the main hurling title make a return journey to its first resting place overlooking the Sea of Moyle.