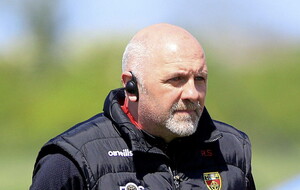 The mark of any good forward is ruthlessness. Having the eye for the target is one thing, but calmly and efficiently dispatching the score is quite another.

Daithí Sands was on a hot streak for Down earlier this year as they flirted with a return to top flight hurling and held their own in the Joe McDonagh Cup.

Sands’s prowess in front of the posts would have pleased Down manager Ronan Sheehan, but if the Portaferry man is bearing down on goal in the Down Senior Hurling Championship tomorrow, Sheehan might feel differently.

The Down boss is still plugging away in goals for Newry Shamrocks and they welcome to Portaferry to Páirc Esler for both teams’ third group match in this year’s championship with Sands freely admitting he would love to fire a sliothar or two past his county manger.

“Make no bones about it, I’ll be hoping to get a few past him on Sunday,” said Sands with a laugh.

“I hope that doesn’t make things too awkward for me when county training start again.”

No matter when transpires tomorrow, Sands will likely remain a fixture in the Down forward line for the years to come. More immediately, he will carry many of Portaferry’s hopes as they seek to recapture the Down senior title.

They have played Ballycran in the last four finals, winning only once and before that they were on the wrong end of the decider against Ballygalget.

“I’ve been playing senior hurling for six or seven years and only won one championship, so that’s not a good return, especially when it was just the three teams,” remarked Sands.

Although the senior championship has expanded to include Bredagh and Newry Shamrocks in recent years, the powerbase remains firmly in the Ards.

Portaferry began this year’s championship with a 1-21 to 0-16 win over Ballycran, champions in three for the last four years, before seeing off Bredagh comfortably last weekend and face a Shamrocks side who have lost two out of two.

However, Sands insists it’s still early days in the race for the Jeremiah McVeagh Cup.

“Yes, we’ve got a good start, but it’s still only the group games, so there’s not as much on it,” he said.

“Bredagh are up and there not just up there to make up the numbers, they’ve come on pretty well. Newry give them a good game of it the first day and gave Ballygalget a good game, by all accounts, for 40 minutes.”

And a healthier and expanding club scene can only lead to better things for the county side according to the Portaferry ace.

“It’s definitely noticeable that as the club scene has got better, that has improved the county team. We’re still not where we want to be,” Sands said.