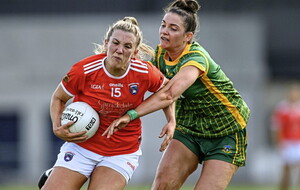 ANTRIM'S All-Ireland win brought the curtain down on the ladies' inter-county season last weekend but the book is not shut just yet with the Irish News Ulster GAA All Stars Ladies Football Team of the Year still to be selected.

And it's all in the hands of you, the reader; this is your chance to nominate the players who you believe have been the best for their county this season, have put themselves on the line for the jersey, who have gone that extra inch to try and be the difference, to help their team win whatever coveted title in their sight.

Forty-five players have been nominated across 15 positions to help you get started but the unique thing about these Irish News GAA All Star Team of the Year awards is that you don't have to pick from just the 45 nominees; they are simply a guide.

The Saffrons cliched their first All-Ireland title in a decade with a replay win over fellow Ulster side Fermanagh helped by a couple of impressive individual performances from Grainne McLaughlin and Lara Dahunsi. McLaughlin finished the game with a personal haul of eight points, five of those from play, while Dahunsi, who was player-of-the-match in the drawn game, put in another massive shift in midfield for the Ulster champions, also scoring the game's opening goal. These two Antrim players are not among those 45 that you can choose from but if you don't want them to miss out, you can still nominate them.

It is by no means easy to pick out just 45 of the best players in the province and with three tiers of championship football, even more players can shine among their peers and those in the likes of the junior and intermediate grades train as hard and as often as the senior teams and have the same goals and targets - to win the silverware, to be the best at their level and to get to the next one.

I'm not going to pick out my top 15 - I'll sit on the fence again this year - but here's a quick reminder of what went down this 2022 championship season.

Armagh completed three successive Ulster senior titles and their extra-time final win over Donegal will not be forgotten in a hurry. The Orchard County needed captain Kelly Mallon to keep her nerve to convert a late long range free to send the game to extra-time and then with ticking rapidly ticking away in extra-time and Donegal leading by two, Catherine Marley overturned possession, the ball ended up in Mallon's hands and she fired past Roisin McCafferty in the Donegal goals to seal a sensational comeback victory. Donegal's Geraldine McLaughlin scored an incredible 1-11 that day as well and still ended up on the losing side.

It was Donegal, though, who were the last Ulster senior team standing in the All-Ireland series reaching the semi-finals, losing out to defending champions Meath. It might not have been their day but they were led by captain Niamh McLaughlin who was exceptional for Maxi Curran's side all year. Armagh bowed out at the quarter-final stage, Cavan survived a relegation scare but Monaghan lost their 30-year senior status.

There was equal drama in the Ulster junior final with defending champions Antrim fighting back from seven points down at half-time against Fermanagh to win by the narrowest of margins to retain their title. There was a shoot-out that day between Erne star Eimear Smyth and Orlaith Prenter - Smyth finishing with 10 points and Prenter with 1-6.

Smyth finished second in the race for the Golden Boot award - the prize on offer for the leading scorer in the TG4 All-Ireland Championships. She finished with a tally of 5-27 from Fermanagh's outings that saw them reach the All-Ireland final losing out to Antrim in last weekend's replay and she was the only Ulster player in the top 10. Derry also competed in the junior championship but had a difficult season that ended with no victories.

In the intermediate championship, Tyrone had an Ulster final victory over Down with their captain Niamh O'Neill, who has been exceptional all year, hitting 1-4 and Chloe McCaffrey grabbing six points. Tyrone reached the All-Ireland quarter-finals while Down were unable to make it out of the group stages.

If you do not want your favourite players to miss out, get your say in now and vote in this year's Ulster Ladies Football Team of the Year. Don't forget that you will also get the chance to select your Ulster Ladies' Footballer of the Year from your 15.

* This year's Irish News Ulster All Star Awards will be presented at glittering ceremony the Ulster Hall in Belfast on September 30. The awards are supported by our sponsors O'Neills Sportswear, Millar McCall Wylie, Spar, Options IT, Kingsbridge Private Hospital Group and the Canal Court Hotel.