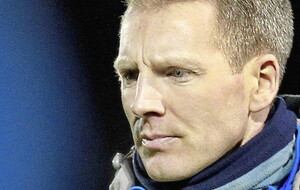 FORMER Antrim attacker Kevin Brady has welcomed the appointment of Andy McEntee as Antrim football manager, and believes the new boss can build on the good work done by predecessor Enda McGinley.

McEntee, who stepped down last month after six seasons in charge of his native Meath, wasted no time in getting back into inter-county management.

His primary aim will be to guide the Saffrons to a second promotion in three years with a strong NFL Division Three challenge.

“I think it’s a good appointment. He has that inter-county experience, which is good, and he’ll know what it’s about,” said Brady.

“I really hope that it works out for Antrim and that he’ll be able to develop the team and bring them on.

I thought that Enda McGinley did a good job, and hopefully Andy can push on with them.”

Brady feels significant progress has been made under Tyrone All-Ireland winner McGinley, who left the post after two years, winning promotion from Division Four at the first attempt.

“Enda and Stevie (O’Neill) and the rest of the team there have got them up into Division Three, and this year they really pushed on, and at one stage, promotion looked like it was on the table.

“Trying to consolidate in Division Three next year and hopefully get a good run in the Tailteann Cup would be the aim for the year ahead.”

A move to Ulster promises a less pressurised atmosphere for McEntee, who had to endure abusive criticism during his time in Meath, principally from within the county.

“There was always that thing with his son playing, which is always difficult, and his son is a very good player,” Brady said.

“It’s tough in Meath when you face Dublin every year if you get to a Leinster final or whatever.

The long-awaited approval of the Casement Park redevelopment project has come as a welcome development to Antrim gaels, including Brady, who graced the old stadium on many occasions as a talented attacker.

“I’m delighted. There has been so much talk about Casement Park, I just can’t wait to see the first digger move in and for the building to start.

“It is hopefully only two or three years away now before we see Antrim teams back playing there, and it’s something for those up and coming players to look forward to.”

A generation of Antrim footballers and hurlers has missed out on the experience of playing at the west Belfast venue, but the construction of an ultra-modern stadium on the now derelict site promises an exciting future for young, emerging players.

“It’s very sad for them. Probably in hindsight, a lot of things would have been different. They wouldn’t have closed it as quickly as they did, knowing that they know now.

“To be fair, Corrigan Park and St John’s have really stepped up, and turned it into a county ground, as such, as best that they can.

“And nobody is complaining about going there, but it will be great to get back into Casement.

“Getting a Championship match in Casement Park, a home fixture there, would have to be an advantage to Antrim, and I really do hope it happens sooner rather than later.”