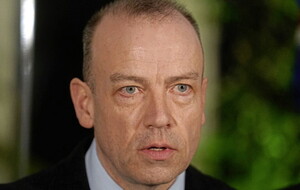 THE family of Dáithí Mac Gabhann is to meet the secretary of state next week about the delay in the new organ donation legislation.

Dáithí’s Law, the opt-out organ donation system due to come into force in spring 2023, cannot be passed without a functioning government.

Named after Dáithí MacGabhann (6), who has been waiting for his transplant for most of his life after he was born with hypoplastic left heart syndrome, it would mean all adults became potential donors unless they specifically opted out.

Dáithí's parents Máirtín and Seph, who have campaigned tirelessly for the opt-out organ system, last week said they were devastated it had been stalled due to Stormont's stalemate.

After writing to Chris Heaton-Harris in the hope he may be able to bring it forward, they confirmed yesterday that they will hold discussions with him on February 1.

They added that the date marked the "start of national heart month".

The leaders of Northern Ireland's five main political parties had last week also united to write to the secretary of state asking him for legislative intervention to allow for the opt-out organ donation process, approved by the assembly last year, to go ahead.

The Department of Health requires secondary legislation to be passed by the assembly to become law and this cannot happen with Stormont suspended.

Meanwhile, former UUP assembly member Jo-Anne Dobson, who underwent transplant surgery to donate a kidney to her son, has also written to Mr Heaton-Harris urging him to "fully implement" the legislation on "behalf of people waiting so anxiously for a transplant".

Ms Dobson, the original proposer of an opt-out organ donation system at the assembly, said it would be "unforgivable" if the law was not passed.

"The passage of the bill - to be known as Dáithí ‘s Law - with crucial support across all major parties - was understandably a momentous occasion for Northern Ireland," she wrote.

"This was not always the case when, as a former MLA, I saw first-hand, in 2015, the issue of adopting an opt-out system become increasingly politicised at Stormont. This made it impossible to pass the bill at that time.

"It would be unforgivable were adopting an opt-out system, which is rooted in transforming and saving lives through organ donation, to once again become a victim of our political disagreements when, just last year it became a shining example of political agreement.

"I urge you to avoid the temptation to fold this bill into the current protracted political discussions, but rather to recognise that your personal intervention to fully implement opt-out would enable you to give local political parties a clear demonstration of what can be achieved when they do work together."

She added that the bill "brings hope to those who are waiting for a transplant, encourages people to think and talk about becoming an organ donor, prompting discussions which can save lives".

Alan McBride: Amnesty bill will not cause victims and survivors to forget past