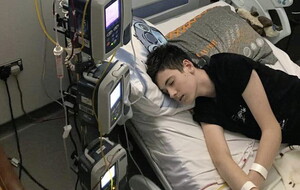 Daniel Greer was diagnosed in June

THE family of a Newry teenager have said that "one kind stranger's selfless act" has led to him receiving a life-saving stem cell transplant.

Daniel Greer (15) was this week discharged from hospital after undergoing the operation and spending 49 days in an isolation ward at a Bristol hospital.

In a post on social media, his family said they were "especially thinking about our anonymous donor right now" as they marked his release.

A pupil at Abbey Christian Brothers' Grammar School, Daniel was diagnosed in June with an aggressive blood cancer that spreads rapidly.

Shortly after it was confirmed he had Acute Myeloid Leukaemia (AML), he began 10 consecutive days of treatment consisting of 25 doses of intense chemotherapy. His family were told that he needed a bone marrow transplant, with the chances of finding a match at one in 10 million.

Since then they have fought a relentless campaign urging people to sign up to the stem cell register, as a transplant is the teenager's only chance of survival.

And in October, the teenager's family revealed that a donor had been found. In an update on his progress, his family shared a photograph of a smiling Daniel outside the hospital following his discharge with the caption: "what a difference a donor makes".

"As you may know, our Daniel underwent a stem cell transplant in Bristol Royal Hospital for Children on 21st October as part of life-saving treatment for a blood cancer known as acute myeloid leukemia," they wrote.

"He then spent 49 nights in an isolation ward as doctors waited for the new cells to take effect. It's been tough few weeks - a lot of pain and sickness for a 15-year-old kid to handle. But yesterday, Daniel left the hospital as he was deemed fit and well enough to be discharged into outpatient care."

They added that Daniel will have to "stay in Bristol for some weeks yet as this is by no means the end of his hospital visits".

"But being allowed to live outside the hospital in between outpatient treatments is a hugely positive step, and a massive relief for his exhausted family," they said.

"We're delighted to share this news will all the individuals, charities, companies, sports teams and media organisations who so kindly helped Daniel in his successful search for a match.

"We're especially thinking about our anonymous donor right now, because happy days like this are only possible thanks to one kind stranger's selfless act.

"Please sign up to a bone marrow register today wherever you are in the world, because there are plenty more patients like Daniel who still need your help."

Sean Quinn: Getting into the gravel business