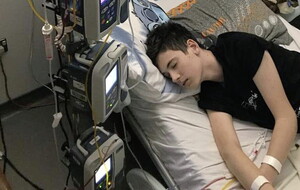 The teenager from Newry was diagnosed in June

THE family of a Newry teenager awaiting a life-saving bone marrow transplant last night revealed that a "suitable donor has been found".

Relatives of Daniel Greer (14) say while there is "still a long, risky road ahead", they are delighted that he had a donor match.

A pupil at Abbey Christian Brothers’ Grammar School, Daniel was diagnosed in June with an aggressive blood cancer that spreads rapidly.

Shortly after it was confirmed he had Acute Myeloid Leukaemia (AML), he began 10 consecutive days of treatment consisting of 25 doses of intense chemotherapy. His family were told that he needed a bone marrow transplant, with the chances of finding a match at one in 10 million.

Since then they have fought a relentless campaign urging people to sign up to the stem cell register, as a transplant is the teenager's only chance of survival.

And yesterday the teenager's family revealed that a donor had been found.

"We have some brilliant news that at last we can now share - a suitable donor has been found for our Daniel," they wrote on their Do It For Daniel Facebook page.

"This amazing person came forward several weeks ago but as you can imagine, there are lots and lots of laboratory checks that have to be carried out before doctors can be sure they are the best possible match."

They also said that while "we had got our hopes up before but this time, fingers crossed, it’s all systems go".

"Daniel should be heading to Bristol next week to be prepped for what we hope will be a life-saving transplant," they said.

"We know there is still a long, risky road ahead and Daniel may have to get a lot sicker before he gets better.

"He will have to spend several months in isolation with only his mum and dad allow to visit. But finding the right donor has at least given him a fighting chance against leukaemia.

"We are incredibly grateful to everyone who has supported us on this rollercoaster journey so far."