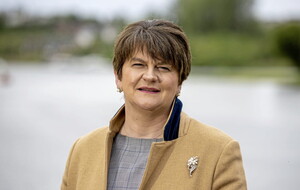 THE UNITED Kingdom is imperfect but the prospect of a border poll "fills many unionists and those who are undecided with serious apprehension", a board member of a newly-formed civic unionist group has said.

Sheila Davidson, the Belfast-based PR consultant who last week joined former DUP leader Arlene Foster at the London launch of the Together UK Foundation, said that while there were some flaws in the union, there is deep uncertainty about how a united Ireland would "impact on our pensions, our health service, our benefits, our legal aid rights and our jobs".

Ms Davidson stressed that the group is "very much non party-political". She said its focus was on ensuring independent information was available that informs the public about the "long-term advantage" of remaining part of the UK.

"We embrace every shade of unionism in the UK and acknowledge that it is a very broad church," she said in a platform in yesterday's Irish Times.

The piece highlights what is termed "one undeniable fact" – that the north "benefits annually from a £15 billion investment in our economy", which she said underpinned pensions, the health and education system, infrastructure, and a social housing system "that is unique in Ireland".

Ms Davidson conceded that the health service is "under huge strain" but argued that it remains the "envy of those countries that have to pay insurance".

"We have a benefits system that entices the poorest and most disadvantaged people in the world to risk their lives on boats to get here, even if our generosity as a society may at times be questionable," she said.

"Our legal system is also under enormous financial strain, but the principle of legal aid and equality of arms remains one of our greatest human rights."

It's for these reasons, she argued, that the potential for a referendum on Irish unity "fills many unionists and those who are undecided with serious apprehension".

"We need to learn the lessons from Brexit, where too many people voted on emotion rather than facts and the old adage of 'be careful what you wish for' is resonating all too clearly," she said.

The Together UK board member said "what we have in the United Kingdom is not perfect" .

"Some of us have very grave doubts that those in Westminster truly believe in a United Kingdom that values each of the constituent regions equally – that needs to be addressed with more substance than soothing words," she said.

"The fact is that the status quo, while imperfect, is familiar and capable of change. However, I don't know how being in a united Ireland would impact on our pensions, our health service, our benefits, our legal aid rights and our jobs."

She said the public needed "facts, not rhetoric".

"Vague promises of financial support from the United States and Europe are not going to cut it if our experience from Brexit is anything to go by," she said.