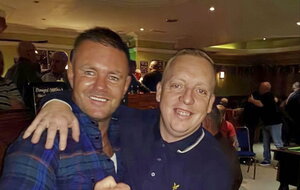 Sean Fox pictured with his close friend Jim 'JD' Donegan, who was also murdered in 2018

THE PSNI has been urged to reassure members of the public after the brutal murder of Sean Fox in west Belfast – the latest in a series of gangland-style killings in the city.

Mr Fox, who is believed to be in his 40s, was sitting in the Donegal Celtic FC social club when two masked men walked into the busy venue and shot him several times at around 2.30pm on Sunday October 2.

He was pronounced dead at the scene.

The gunmen are believed to have made their escape on foot along Suffolk Road, which was closed off for a time after the shooting.

While it is not known who was responsible for the murder it had all the hallmarks of a gangland hit.

The Manchester derby was being shown live and shocked patrons watched on in horror as Mr Fox was gunned down.

Further details of how the killing was carried out emerged last night.

It is understood some of those present in the bar believed the masked gunmen were attempting to rob a bookmaker who was running a betting book inside the bar at the time.

Sources say that a back-up gunman took up position at a door to a bar while the triggerman made his way towards the victim.

After shooting him in the head, the gunman is said to have shot the helpless victim multiple times after he fell as other customers screamed and ran for cover.

It is claimed the gunmen calmly made their getaway from the club.

Sean Fox pictured with his close friend Jim 'JD' Donegan, who was also murdered in 2018

The 43-year-old was shot dead by a lone gunman as he sat in a red Porsche Panamera outside a school on the Glen Road in west Belfast in December 2018.

In 2019, police said they believed both the INLA and Óglaigh na hÉireann (ONH) were involved in the shooting.

Sources have suggested Mr Fox also had links to the drugs trade.

Like Mr Donegan, the murdered man was also involved in the car trade.

It has been claimed he provided finance to those who wanted to buy a car but had no credit rating.

Advertisements on a Facebook page operated by Mr Fox headed 'Rent to Own Cars' confirm that no credit checks were carried out and after a deposit was put down motors were paid off in weekly instalments.

Mr Fox is known to have had an interest in high end cars and a picture of a top of the range Mercedes on a different Facebook page features the personalised number plate FB07OXY.

A list containing the names of 24 alleged drug dealers were circulated on social media after Sunday's murder with the words: "Let today be another warning to get out off are (sic) country."

Informed sources say the list had previously been circulated.

A spokesman for the PSNI last night said: "Police are aware of a list of names which has been circulated on social media and are making enquiries.

"While we do not discuss the security of any individual, we never ignore anything which may put an individual at risk."

Mr Fox's murder is the latest in a series of drugs linked murders carried out in recent years.

In December last year Mark Hall was shot dead as he visited his mother’s house in the St James’ area of west Belfast.

The previous June, his friend Warren Crossan was gunned down in the same area.

He has been linked to the murder of Dublin gangster Robbie Lawlor, who shot dead in Ardoyne in north Belfast as he collected a drug debt in April 2020.

SDLP Policing Board member Sinéad McLaughlin last night said Mr Fox’s murder “is the latest in a number of similar murders in west Belfast over the last few years” and it has “sent shockwaves through the local community”.

The assembly member said police should move to reassure the public.

“I don’t believe that speculation around the reasons for this murder are particularly helpful at this time, given the grief that Mr Fox’s family will no doubt be dealing with,” she said.

“But I feel there is an onus on police, given extensive media reports, to reassure the community and commit to doing everything possible to take these gunmen and their weapons off the streets before another life is lost.”