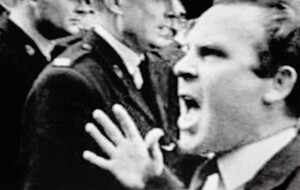 Civil Rights protesters were attacked by police at Duke Street in Derry on October 5 1968.

Former civil rights’ activists from 1968 are being urged to join a photocall in Derry next week to mark the anniversary of the October 5 1968 protest march, which many believe marked the start of the troubles.

Veteran activists, Eamonn McCann and Bernadette McAliskey will also take part in an “audience with” event marking the anniversary. Chaired by Professor Patrick Murphy, the event is part of a conference at The Junction, Bishop Street in Derry on Saturday, October 8.

Organised by the Northern Ireland Civil Rights’ Assocaition (through Mr McCann and fellow campaigners, Eamon Melaugh and the late Fionbarra O’Dochartaigh), the 1968 march was the first time the repression of the Catholic minority was exposed to a wider audience. Television footage of police baton-charging marchers, including a number of British Labour Party MPs, was shown around the world.

Civil Rights protesters were attacked by police at Duke Street in Derry on October 5 1968.

Mr McCann called on activists from 1968 to join the photocall next Wednesday October 5. He suggested that if they were unable to attend, they should encourage family or friends to represent them at Duke Street railway station in Derry.

“The Northern Ireland civil rights’ movement was made up of a diverse group of people and organisations with differing political aims, ideologies, cultural and religious beliefs.

“They forged a unity based on a growing awareness of the need for an effective vehicle for political and legislative reform with the common vision of social justice and equality for all through peaceful means. We want to mark their involvement and hope many of these activists (or their representatives) will join us at 11am at Duke Street train station on 5th October 2022,” he said.