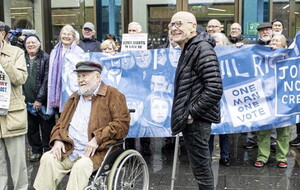 Organisers, Eamon Melaugh (left) and Eamonn McCann (right) were joined by other civil rights' veterans who took part in the Northern Ireland Civil Rights' Association march in Derry on October 5 1968 at a photocall marking the anniversary of the event. Picture by Brian McDermott.

VETERANS of the civil rights' march which marked the start of the Troubles gathered in Derry yesterday to mark the 54th anniversary.

Campaigners and British Labour Party MPs were among the protesters beaten and baton charged by police as they marched in Derry on October 5 1968. Captured by an RTÉ film crew, scenes from the march brought an international focus to the treatment of the north's nationalist minority.

The march, which was banned by the Stormont government, was organised by activists Eamonn McCann and Eamon Melaugh along with the late Fionbarra O'Dochartaigh. Mr McCann and Mr Melaugh were among the large number of veterans to turned out yesterday.

A former People before Profit MLA, Mr McCann paid tribute to both those who attended and to veterans who have since died.

One of the organisers, Dympna McGlade, said that, despite the inclement weather, the turn-out was inspiring.

“There were people there in wheelchairs and walking sticks who haven't seen each other in years; they were from every background. It was great to see the likes of Dermie McClenaghan and other veterans," she said.

"The bodies may be older, some were ill, but the passion for social just still burns as brightly as it did 54 years ago and they are still inspiring people to continue the campaign for social justice for all."

A conference marking the anniversary will take place at The Junction, Bishop Street in Derry on Saturday. The event, from noon until 5pm, will feature an audience with Mr McCann and fellow veteran campaigner Bernadette McAliskey, chaired by Professor Patrick Murphy.