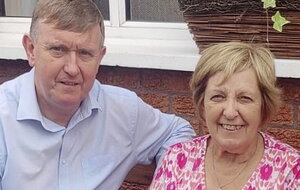 The 57-year-old, who previously held the finance and social development portfolios in the executive, replaces his late colleague John Finlay, who died from cancer earlier this month.

Mr Storey, who last year declined Edwin Poots' offer to be first minister, lost his seat to Alliance's Patricia O'Lynn in May's election, after almost two decades as an MLA.

DUP leader Sir Jeffrey Donaldson said he was delighted someone of Mr Storey's calibre was succeeding the late Mr Finlay.

"Mervyn is rooted in the Ballymoney community and will be a first-class advocate for the people of Ballymoney," he said.

Mr Storey, who was previously a councillor for Ballymoney Borough Council before moving to Stormont, said it would be an "honour to return to continue serving the people of Ballymoney".

"John had faithfully served on Causeway Coast and Glens Borough Council since it came into operation," he said.

"It will therefore be a daunting task to fill the vacancy following John's death."

A former chair of the assembly's education committee, Mr Storey is a Free Presbyterian and a creationist.

His father Nat was a founder member of the Protestant Unionist Party and an election worker for Ian Paisley.