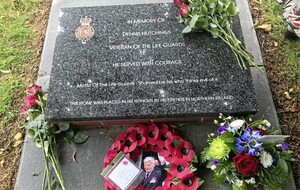 A memorial at Palace Barracks to Dennis Hutchings, who died while on trial for attempted murder

FAMILY members of a man shot dead by the British Army have described as hurtful the decision by the Ministry of Defence to allow a barracks memorial to the late soldier accused of attempting to murder him.

The memorial to Dennis Hutchings (80) was officially unveiled at a service held in the grounds of Palace Barracks in Holywood, Co Down.

Mr Hutchings died late last year after contracting Covid-19 while on trial for the attempted murder and grievous bodily harm of John Pat Cunningham, shot three times as he ran from an army patrol in Benburb, Co Tyrone, in 1974.

The 27-year-old victim had learning difficulties and would have instinctively run from authority figures, his family has previously said.

Members of Mr Hutchings' family joined local supporters for a service on Saturday, during which the memorial stone was unveiled.

But Mr Cunningham's family are questioning why the MoD allowed the memorial to the former soldier to be placed on its property, particularly as Mr Hutchings died of natural causes and he was facing attempted murder charges when he passed away.

In a statement issued through the Pat Finucane Centre, the Cunningham family said it accepts "the right of all citizens to honour and commemorate their dead".

"But, in the specific circumstances of this week’s events, (the family) would like to ask the Ministry of Defence the basis for allowing a monument to be erected on MoD property," according to the statement.

He "had never offered any explanation of his actions to police on the day that John Pat was shot dead and... refused to cooperate with the RUC in the immediate aftermath," the family said.

They also asked the MoD what efforts, if any, were made to consult them over erecting a monument to the man accused in connection with John-Pat's death - "a vulnerable adult who posed no threat?"

"Also they would ask the MoD if there are plans to erect monuments to other soldiers who pass away while there remain unresolved legal actions against them."

A spokesman for the MoD, in a statement over the weekend, said the event was a private service. The ministry did not immediately respond to a request for comment from The Irish News.

"The Palace Barracks Memorial Garden is not an officially recognised MoD memorial. These memorials are requested, erected and maintained at private expense. The National Memorial Arboretum is the official memorial to the Armed Forces since the end of the Second World War," the spokesman said.

John Ross, an army veteran and supporter of Mr Hutchings who helped organise the memorial service and laying of the stone, said it was "unveiled in the Palace Barracks Memorial Garden which contains several memorials to other veterans, so it was very fitting".

"Dennis insisted he was completely innocent of all charges from the outset,” Mr Ross told the News Letter. He was not immediately available on Monday to comment further.

"Had the family decided to erect a private memorial in Cornwall there would have been no real objection," a representative of the Pat Finucane Centre said. "The fact that the MoD allowed this to happen (at Palace Barracks) is particularly hurtful to the family."