Mother and baby homes: 57 reports of alleged historic crimes made to police 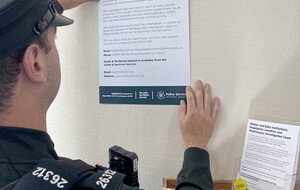 Thousands of people entered mother and baby homes, workhouses and Magdalene laundries over a 68-year period

POLICE have received 57 reports of alleged crimes at mother and baby homes, workhouses and Magdalene laundries since officers launched a major probe less than a year ago.

The PSNI began their investigation into the institutions on October 6 2021.

The institutions, run by the Catholic Church, the Church of Ireland, the Salvation Army and the state, existed in Northern Ireland until 1990.

A report published last year found around 10,500 women and children, including rape and incest victims and a girl as young as 12, were sent to homes between 1922 and 1990.

Many of the women felt coerced into giving up their children.

Police said the 57 reports included some from mothers who have never met their children.

Adele Johnstone, from Birth Mothers and their Children for Justice, gave birth at the Marianvale home in Newry.

She encouraged any potential victim to come forward.

"I would encourage anyone that has been impacted by the mother and baby institutions, Magdalene laundries and workhouses in Northern Ireland between 1922 to 1990 to come forward and speak to the dedicated Police Service of Northern Ireland investigation team," she said.

"You will be treated with complete sensitivity and respect as they wish to build a complete picture of what happened in these institutions.

"The only way to right the injustices of the past is to make your voices heard."

Neighbourhood policing teams are speaking to organisations and members of the public about the investigation.

Detective Superintendent Gary Reid, who is leading the investigation, said: "The last known institution closed down in 1990. This is not a lifetime ago, and we believe there are people out there who are still suffering in silence.

"It's important that we are engaging with our local communities about this investigation as there were so many across Northern Ireland that have been affected in some way by these institutions.

"We want to reassure anyone impacted in any way that this investigation is still very much live and ongoing and that we want to hear from them.

"If you were the victim of abuse or other forms of criminality in any of these institutions, or know somebody who was, or if you witnessed anything suspicious, please contact us.

"We care about what you have to say, will listen and support you, and will act to keep you and others safe."

The police team can be contacted on email at MotherBabyHomes.Magdalenelaundries@psni.police.uk or via a direct line, 028 9090 1728, which is open during office hours between Monday and Friday.

Last month, the DUP confirmed to The Irish News it will back legislation at Westminster for survivors of mother and baby homes if the Stormont impasse continues.

The DUP is refusing to form an assembly as part of its protest against the post-Brexit Northern Ireland Protocol trade agreement.