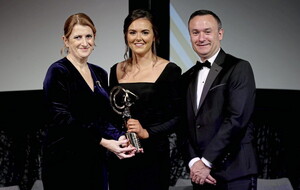 She edged out team-mates Áine Graham and Emma Laverty for the award, although all three players are included in the Soaring Stars team of the year.

Graham had an outstanding year in goals and succeeds her sister Catríona who took the number one jersey in last year's team after helping the Saffrons to the All-Ireland Intermediate title.

Laverty slots in at midfield, although she wasn't present to accept her award as she departed for Australia 10 days earlier.

The only other Ulster player included in the team is Derry defender Gráinne McNicholl who took one of the half-back positions. It was the Swatragh player's first award and came just seven days after her wedding to Conor McAtamney.

PwC GPA Intermediate Player of the Year is Galway's Lisa Casserly while the senior accolade went to Kilkenny forward Miriam Walsh. The Players of the Year in the various grades are voted on by the inter-county players from a shortlist of three.

The joint managers of the Antrim Junior team, Brian Kearney and Mark 'Duck' McFadden, had been shortlisted for Manager of the Year, but that award was lifted by Kilkenny senior boss Brian Dowling for guiding the Cats to their 15th All-Ireland title with a narrow victory over Cork.

Kilkenny dominated the 2022 PwC Camogie All-Stars team, taking eight places. Player of the Year Miriam Walsh slots in at full-forward for her third award, and there were also third awards for defenders Grace Walsh and Claire Phelan.

Goalie Aoife Norris and another defender Laura Murphy picked up their first All-Stars, while the other three Cats on the team are Julianne Malone, Katie Nolan and Denise Gaule, the latter picking up her fifth successive award and sixth in total.

Last year's champions Galway only had one award, Shauna Healy recognised for the fourth year in succession. Beaten finalists Cork picked up four awards through Libby Coppinger and Saoirse McCarthy in defence, Ashling Thompson in mid-field and Katriona Mackey at corner-forward. The team is completed by Waterford pair Lorraine Bray and Beth Carton.

Speaking at the event Camogie Association President Hilda Breslin said: “Congratulations to all the PwC Camogie All-Star and Soaring Star Award recipients for 2022. It is a huge achievement to be recognised for your performances at the highest level and I hope tonight's achievements inspire you and future generations to continue to light the way for our sport. I would like to commend the Camogie All Stars Committee for their hard work and dedication spending each weekend visiting matches throughout the country.

I would like to welcome PwC to the Camogie family and thank them for their hard work and support in ensuring our successful celebrations tonight. Thanks to the GPA who continue to co-sponsor the Camogie Player of the Year Awards. I congratulate Miriam Walsh, Lisa Casserly, Dervla Cosgrove for their success and to the nominees in each of our Senior, Intermediate and Premier Junior Championships. To be recognised and voted for by your peers is an enormous honour.

Congratulations to Brian Dowling for his second time win for Kilkenny in the last three years and indeed his second win as Camogie Manager of the Year.”

Their superb performances throughout the season see them as truly deserving winners, a fitting reward for the commitment and dedication they demonstrate, while also inspiring younger generations. All-Stars are not only outstanding individual players, but also integral parts of the teams they play for. Their core values, such as determination and teamwork, are held closely at PwC.”

Speaking on behalf of the GPA , National Executive Committee Co-Chair, Maria Kinsella said: “To all the PwC Camogie All-Star winners, massive congratulations. These awards are the highest individual honours you can achieve in camogie and each and every one of you should be very proud of being selected and of your performances in 2022.

Our games are all about what you can do as part of a team, but there is still a very special place for honouring individual excellence. Miriam, Lisa and Dervla have demonstrated the highest levels of skill, dedication, and teamwork throughout 2022 and are very worthy winners of the Player of the Year Awards. They should be especially proud of their achievements given that they were selected by their fellow players.

"My thanks to PwC who are leading the way when it comes to equality within Gaelic games given their backing for both the male and female codes. Thank you also to the Camogie Association for celebrating the inter-county game with these awards. We look forward to continuing to partner with you on the Player of the Year Awards and to further strengthening our relationship into the future.”