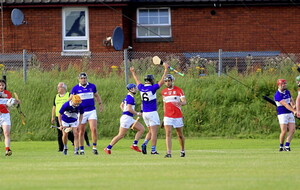 OISIN MacManus says his club transfer from Liatroim Fontenoys to St John’s, Belfast was work-related and that he also wanted to hurl against the best in Antrim.

His decision to join the ‘Johnnies’ earlier this year was also a surprise given that his late grandfather Pat McManus hurled for west Belfast neighbours O’Donovan Rossa as well as Antrim and Ulster in the 1940s and 50s.

His father Niall also represented Antrim up to U21 level until the family moved to the Mourne County before Oisin was born.

The Down attacker inspired St John’s to a brilliant championship victory over Loughgiel Shamrocks at Corrigan Park on Saturday night, notching a cool 10 points in the Belfast side’s nervy two-point win.

He'd played "five or six" league games for his new club but really hit form against the Shamrocks, nabbing three points at the start of each half to give the Johnnies a strong foothold in the game.

MacManus works as a regional development hurling officer for the Ulster Council and is also studying sports psychology.

“I moved up here last summer, I’d planned it for a while so it was more to get out of the house if I’m honest!”

He met several St John’s players during his studies at both UUJ and Queen’s and thought Corrigan Park was a better fit than resuming the family link with O’Donovan Rossa.

“My dad and my grandad Pat were associated with Rossa for years. They’d be Rossa through and through,” said MacManus.

“My family is originally from up here so it’s come full circle. But I just knew more of the St John’s boys. I know Simon ‘Doc’ [Doherty] and I went to Jordanstown with Shea [Shannon] and Peter [McCallin], and I was in Queens with Jack Bohill and Conal Morgan.

“I thought it would be a challenge as well because St John’s are a top team and I want to push myself to be the best and I thought this move was right for me.”

Leaving your native club is never easy but the lure of the big smoke and spreading his wings was too strong to resist.

“It was very tough leaving Liatroim,” he said. “There was a lot of talking within the family. My brother Fergal is with me at St John’s too.

“The two of us thought we’d take the challenge on.

“I think it’ll improve me as a hurler because you’re playing against the top hurlers - the Eddie McCloskeys of the world and Niall O’Connor of St Enda’s is playing against us in our next game, and Paddy Burke and Neil McManus of Cushendall.

“You’re only going to get better playing against those boys - and that’s not to be disrespectful to anyone in Down. Antrim are Division One in Ireland. I want to play against them, challenge myself and see if I can do it.”

Their two-point win over Loughgiel last weekend was a huge shot in the arm for the Johnnies who have their perennial battles with sharing a dozen dual players during the hurling and football championships.

But MacManus prefers to take the positives out of so many St John's players juggling both codes.

“We’ve got the physicality from the football that a lot of teams don’t have, understanding that tackling and pressure and we’d also be a fit team.

“I think that’s a massive positive and we use that to our advantage.”

For MacManus, he acknowledges that it’s been something of a culture shock coming up to a city club like St John’s.

“It’s different coming from the country into the middle of this!” he laughed.

“But I’m getting into the swing of things and I’m getting to know who’s who. It’s fierce craic but when push comes to shove they all focus and get down to business when the games come.”

St John’s boss Brian McFall has been hugely impressed with MacManus’s contribution since joining the club.

“Oisin just came to us this year and he’s been fantastic,” McFall said.

“His first game against ’Rossa he scored 10 or 11 points and since then he’s been trading points, a lot from frees but as you saw against Loughgiel, he scored from play too when he got ball to hand. Anything he touched went over the bar.”