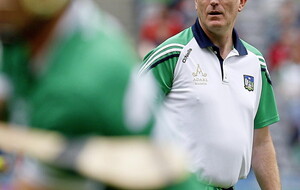 John Kiely is hoping to guide Limerick to the Liam MacCarthy Cup for the third year in-a-row. Picture by Philip Walsh

The dressing room afterwards was a scene of devastation but McDonagh once recalled Cian Lynch, the captain, speaking about using the experience as a stepping stone to the future. When the squad returned that evening to the Kilmurry Lodge in Castletroy for their post-match banquet Brian Ryan, the Limerick manager, expressed similar sentiments.

“That defeat was personally very disappointing, but I said that it would be the making of that group,” recalled Ryan. “It was always about the bigger picture, about educating the players to play on the bigger stage. I would have seen it as a complete disaster if we had won that All-Ireland minor title and done nothing else.”

The potential to do more was always ingrained and promoted in those players. It was clear from an early stage that the 2014 minor crop were a golden generation. Lynch was already an exceptional talent at U14 but there were brilliant players everywhere. As the team moved through the grades from U14 to U16, Aaron Gillane was only on the B squad. Seán Finn spent a couple of years with the B squad too.

Limerick walloped Galway in the final of the 2012 Arrabawn tournament - then the All-Ireland U16 competition - by 21 points. A year later, a significant number of those players made up the minor squad which won the Munster title, but lost the All-Ireland semi-final to Galway in devastating circumstances.

Galway won by one point but Barry Nash had a perfectly good point ruled out by a glitch in the HawkEye system. Waterford, who Limerick had defeated in the Munster final replay, went on to convincingly beat Galway in the final.

With the bulk of the 2013 squad still available, the target was obvious in 2014 – win the All-Ireland. Limerick came up just short but the road to their modern senior success began with the 2013-2014 minors.

Six of the players which lined out in the All-Ireland semi-final two weeks ago featured in that 2013 All-Ireland minor semi-final - Nash, Lynch, Finn, Tom Morrissey, Darragh O’Donovan, Seamus Flanagan. Two more current players were part of that squad; Richie English (who captained that team) and Mikey Casey.

When Limerick went seeking atonement in 2014, Finn, Lynch, Nash, Morrissey and Flanagan were joined by Peter Casey and Robbie Hanley. Gillane was also part of that squad but he didn’t make the match-day 24 for the All-Ireland final.

It was a serious set-up. Ryan immersed himself so much in the High Performance environment that he invested 30 hours a week into the job.

Forensic attention to detail was his calling card. The week before Limerick played the 2014 All-Ireland minor semi-final, Ryan arranged for Ronan Lynch to tog out with the Limerick seniors for their All-Ireland semi-final against Kilkenny. Lynch took 25 frees during the warm-up before togging in again.

Nothing was left to chance, but Ryan’s philosophy was still always governed by a culture of continuous development. Of the squad which reached the 2014 minor final, 14 were underage again in 2015.

Ryan was never slow to take a chance on promise and talent, no matter how young or unproven they were at minor level. Thirteen days before the 2013 All-Ireland minor semi-final, Ryan rang Brian Finn, then Limerick U16 manager, and asked him if anyone was shooting the lights out. Finn mentioned Seamus Flanagan. Ryan brought him in for training the following night. Twelve days later, Flanagan came on at half-time against Galway.

A revolving door policy was difficult on young players but it was still clearly a holistic environment with a clear culture of development across all areas. Their attitude was that players could not use being a Limerick minor as an excuse for not reaching their potential in the Leaving Cert.

“All those guys did exceptionally well in the Leaving but they were also able to develop and progress as players,” said Ryan. “We wanted success but we also knew that we would ultimately be judged by how many lads progressed to U21 and senior. That was the ultimate test.”

They certainly passed it. The core group from that 2014 minor team banked that hurt and put it to good use a year later; Finn, Nash, Lynch, Morrissey and Peter Casey played on the team which won the 2015 All-Ireland U21 title. Full atonement for 2014 came when Limerick beat Kilkenny in the 2017 All-Ireland U21 final. Gillane was man-of-the-match in that decider.

Earlier that summer, a number of those players came up against Kilkenny in a qualifier defeat in Nowlan Park. There were even more of them on board again when Limerick beat Kilkenny in the 2018 All-Ireland quarter-final. Kilkenny atoned for that defeat a year later when taking out Limerick in the All-Ireland semi-final.

During John Kiely’s six year managerial reign, Limerick have lost just six of 29 championship matches. Yet the only knockout games Limerick lost in that time were to Kilkenny – in 2017 and 2019.

In many ways, that 2019 defeat was a similar turning point to what Kilkenny experienced against Galway in the 2001 All-Ireland semi-final. Like Kilkenny, Limerick suffered so much pain from that loss that they have used it as the fuel to drive their relentless crusade ever since.

Four months after that 2019 defeat, a Limerick player privately admitted that he still hadn’t got over the loss. The pain was all the more acute again when Limerick saw a Tipperary team they had hammered in the 2019 Munster final go on and win the All-Ireland.

Limerick are now on the cusp of a famous three-in-a-row. Kilkenny are pumped to knock them off their perch but Limerick are also driven for a crack at Kilkenny. As well as Kilkenny being the last team to beat Limerick in the championship, the players from the 2014 minor squad have never forgotten the pain and disappointment they suffered at the hands of Kilkenny in that final.