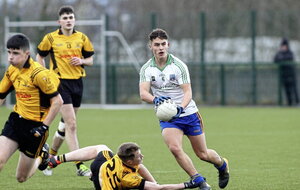 UP and down, defend and attack, score and concede. Success and failure. Johnny Cassidy knows all about both sides of the game with his club Enniskillen Gaels and his county Fermanagh.

Yet while the Gaels are blowing hot again, ending a 16-year wait last season to become county senior football champions, it’s been more losses than wins in the colours of the Ernemen.

However, with a squad that includes some of the best Minor club footballers in Ulster in 2017 and the best schools players in Ireland of 2019, Cassidy insists that Fermanagh have the quality to rise back into the top 16, in League and Championship.

“We’ve had a lot of success at underage, and there’s been success with underage teams in Fermanagh, like the Hogan Cup team. It’s just about trying to bring that into Fermanagh [seniors].

“Derrygonnelly have had a lot of success too, and we want to bring that into Fermanagh and really work towards something. There’s a lot of players throughout the Fermanagh team that are used to winning and we’re trying to implement that with Fermanagh.”

Brandon Horan and Conor McShea are his only Enniskillen clubmates in the senior squad, with injuries affecting the experienced Richie O’Callaghan, but that limited number is no bad thing, given the competitive nature of the eight-team Fermanagh SFC.

An Accounts Assistant at Tracey Concrete, after doing a Business Studies degree, Cassidy himself is a fine operator in defence, even if his time on the senior scene has been tough.

In his four senior seasons so far there’ve been just five championship matches, plus two in last year’s inaugural Tailteann Cup: the solitary win in that timeframe, over Longford, and a defeat to neighbours Cavan.

The six losses have been by an average margin of more than seven points, although the draws have not been kind to them, with defeats by Donegal, Down (under Paddy Tally), Monaghan, and Tyrone ending their Ulster involvement at the first hurdle for four seasons in a row. Monaghan also inflicted a qualifier defeat in 2019.

However, Cassidy hopes that matters can improve going forward, not in the cliched sense but in terms of him getting further up the pitch, with top defenders having returned to the Fermanagh panel.

The Enniskillen man might find himself in the centre back role, as he explains: “I might have more freedom this year since Che and Lee Cullen are back; it depends on the team we face, what type of forwards they have. I could be lined out in the full-back line, could be at half-back line.”

Centre back has been his recent role with the Gaels, but he points out that with Fermanagh “I sometimes might get man-marking jobs…

“I enjoy the man-marking tasks, I thrive off trying to take the other team’s better players out of the game, but defenders have to be able to contribute going forward too. Try to put your man on the back foot, that always helps. Two sides of the game I try to work on.

“In this day and age, whether you’re number 2 or 6, any player needs to be able to contribute going forward, chipping in with one or two points, it’s not just up to the forwards in today’s game.

“That’s definitely something I need to work on, an area of my game I need to improve.”

Former Tyrone forward Ronan O’Neill has come into the set-up, to assist his old teacher at Omagh CBS, Fermanagh boss Kieran Dinnelly, and Cassidy says the Omagh St Enda’s man has “brought a real breath of fresh air to the set-up. The boys have really taken to him, he’s added to the quality of training.”

Fermanagh’s traditional scoring struggles continued in ‘pre-season’ against Tyrone and Fermanagh but Cassidy still saw signs of hope: “Looking at those two McKenna Cup games, we had a lot of wides and a lot of chances that we didn’t take. That’s been the Achilles heel over the years.

“Missing Sean Quigley and Darragh McGurn hasn’t helped either, but we have time to focus on Longford, that’s something we need to improve.”

Fermanagh may well feel they can regard themselves as a top 16 team, perhaps even top 12 – but quite a few others think the same.

As Cassidy acknowledges, “It’s a very level playing field. Teams are in that division for a reason, but you’d look at it and say ‘Very competitive’.

“Westmeath are coming off winning the Tailteann Cup; Down and Antrim, having both changed management, will be hoping to be revitalised; Cavan and Tipp both won their provincials a couple of years ago.

“Every team will probably have aspirations of promotion, so it’s important to build some early momentum, try to hit the ground running.”

Fermanagh’s first two opponents are the two other teams in the division, Longford and Offaly, the latter a county on the rise after winning the Leinster U20 title last year and beating Dublin in this season’s O’Byrne Cup.

Longford will be the first of four home games, and Cassidy declares: “That’ll be the sole focus, we’ll not look any further. You need early momentum if you have any aspirations of promotion.”

With work ongoing at Brewster Park, the match will in Ederney, a familiar venue for the Gaels players at least:

“Brewster after the club championships was probably a bit worn, it needed work done, and a lot has been done behind the scenes too.

“We’re all used to playing out in Ederney. Everybody saw [in the McKenna Cup against Derry] how good the pitch is at Ederney; we’re all happy enough.

“Fermanagh fans usually do travel well, and at home games you’d definitely hear them for every ball. In Ederney the crowd will be that much closer and the atmosphere will be even louder, which will definitely spur us on.

“We’re lucky enough to get four home games and we really have to target those, try to maximise our points from those. Travelling to Cavan isn’t too far, we’re pretty familiar with Breffni Park.”

Whatever way the League goes, Fermanagh’s luck hasn’t changed for the better in regard to the Championship draw, albeit at least they will have home advantage against reigning Ulster champions Derry.

The Ernemen started well in that McKenna Cup meeting, but the Oak Leafers eased to victory, and Cassidy knows the Championship encounter will be far more testing:

“We’d have been happy with our first half performance against Derry, but we know come Championship they’ll be a different animal. Of course we’ll have to improve,.

“We were happy with our defensive performance, but still have to work on our attacking play and be more clinical up front.”

If they’re to be involved in the Sam Maguire Cup this season Cassidy knows that Fermanagh will have to beat Derry and then Tyrone or Monaghan to reach the Ulster Final, or finish in one of the top two spots in a highly competitive Division Three.

“Everyone wants to be playing in the Sam Maguire,” he notes. “We probably know the level we are at. It’s up to us if we want to be in the Sam Maguire, and that’s either through promotion or doing well in the provincial. We’re still a young team so there’s a bit of re-building process.”

Cassidy and his colleagues have the talent to head in the right direction; getting the balances right in the for and against columns will be key.

IT’S rare for Fermanagh to spend three consecutive seasons at the same level, but they may be glad to achieve a fourth year in a row in Division Three.

Gaining promotion will be extremely tough, with the likes of Down, Cavan, Westmeath, and Offaly all setting their sights seriously on the top two places. Indeed, with Antrim, Longford, and Tipperary the other sides in this section, staying up could be a test.

Fermanagh should have the quality to do that, not least because the Ernemen only have to leave Ulster once, going away to Offaly in round two, with four home games. Their other two trips are away to Antrim (round four) and to Cavan, with the ‘Quinn Country derby’ finishing up the group.

As ever, scoring sufficiently to win matches is the big challenge, so much may depend on the involvement of Sean Quigley. If he’s up in attack, along with the versatility and physicality of Brandon Horan and Conall and Garvan Jones, the guile of Darragh McGurn, and the running power of Ultan Kelm, then Fermanagh may increase their scoring return to the sufficient levels. The addition of former Tyrone attacker Ronan O’Neill to the backroom team could boost them going forward too.

At the other end of the pitch Fermanagh have definitely been lifted by the return of the Cullen twins, Che and Lee, and the form of Johnny Cassidy.

Championship is likely to mean an early Ulster exit followed by another go at the Tailteann Cup. Derry look to have much too much quality, even on Fermanagh soil, so the Ernemen may have to be a bottom 16 team in League and Championship for another year.