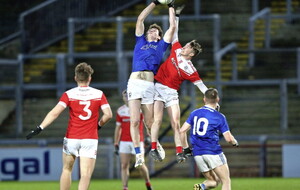 GALBALLY captain Aidan Carberry refused to accept that his season was over when he suffered a hairline leg fracture at the height of the championship campaign.

It was in the Tyrone quarter-final that injury struck, ruling him out of the remainder of the county series.

But the 30-year-old corner-back has made a remarkable recovery, returning to action with substitute appearances in the Ulster Club IFC ties against Genullin and Dungloe.

He'll lead the team out for Saturday's provincial final against Corduff at Páirc Esler, but he's not sure whether manager Paddy Crozier will give him the nod for a starting slot.

“It's always disappointing when you get injured, but especially when it's in the championship, and games coming thick and fast,” he said.

“But you have to take it on the chin and be positive. It's good to be back in full training again, and helping the team in whatever way is asked of me.

“I'll be there on Saturday with whatever is needed of me.

“Injuries happen. It was obviously disappointing to miss out on the semi-final and the final, but you can't mope about.

“You have to be there for the team, especially being captain. You have to be positive, and if I play one minute or 60 minutes, as long as I can help the team get to where we are, I'm happy.

“I feel I'm ready, but it's up to Paddy and Joe (McMahon). It's hard to change a winning team, it's hard to pick out anybody that you're going to drop from that team.

“All I can do is put my full effort in in training, and if that's good enough, it's good enough. I'm happy to do what's asked of me.”

The arrival of former Derry boss Crozier and All-Ireland winning Tyrone coach McMahon has brought instant success to Galbally, with immediate promotion back to senior football followed by a second Ulster final appearance in three years.

“Sometimes a change of face or voice can be a big help, and that's what it has proved this year with Paddy and Joe and the rest of the management team,” said Carberry.

“Everybody has bought in to what they're saying and what they're looking us to do, and we're doing it as best we can.

“It's a player-led thing too, they want what we want, and that makes everything a whole lot easier to follow and implement.

“In 2019 we had a strong management team, but it's a different vibe this year, with outside men coming in.

“They don't have the same influences that your own club men have. Everybody is buying in to what they have brought to the table and what they're saying.

“They have us playing good football, and everybody is enjoying it. It's been great to have them on board.”

Eight different players featured on the scoresheet in the semi-final win over Dungloe, maintaining a trend that has seen the Pearses rack up some big totals in the current Championship.

And in the front line of attack, the form of top scorer Conor Donaghy and fit-again Daniel Kerr has been crucial.

“Conor has really stepped up this year, and we have Dan working his way back from injury.

“Dan has been top class for us. It has taken him a while to get match-fit, for he was out for a long time.

“The more games we can get him, the better he will get, and hopefully he'll step up and do the job for us.”

It was a Monaghan side – Magheracloone – that thwarted Galbally in the 2019 Ulster final, and Corduff's aim is to maintain the strong record of Farney clubs in the competition.

“We're not getting carried away. We know that Corduff team is going to be a tough nut to crack, and they'll be coming fully confident of turning us over.

“But we'll do our homework as much as we can and try to put in a good performance, and hopefully it will be enough come the day.”