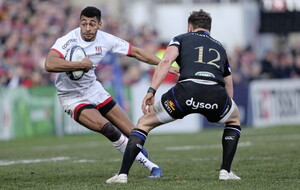 YOU often hear that the GAA could learn things from rugby in the way it goes about its business - and it could - but rugby could learn a lot from GAA too.

The GAA is unrivalled as a community-centred nationwide organisation. Clubs the length and breadth of the country cater for and nurture the interests of their people from the cradle to, quite literally, the grave.

Whether it's by providing walking tracks, playparks, scor, Irish classes, music classes, fun days, trips for older members, Christmas dinners, birthday parties and all manner of social and cultural events not to mention football, ladies' football, camogie and/or hurling at every conceivable level from toddlers, to mothers-and-others, to seniors, to masters, there is something for everyone in the GAA.

Rugby clubs would love to have that status as the epicentre of their communities and, from what I've seen, they are learning from the GAA and working towards that.

So where could GAA learn from rugby? No prizes for guessing the obvious answer: In how it deals with disciplinary matters.

Like so many other sports, both codes have players and supporters who (and I've got my hands up here) are well capable of crossing the disciplinary line but too often the GAA turns a blind eye while rugby comes down on transgressors with draconian toughness.

Here's an example: Last month I went along to Rifle Park when the Banbridge senior team was playing an All-Ireland League game against University College Cork (managed by former Ireland star Michael Bradley). I expected to see a large crowd at the ground but the gates were closed.

A steward was on duty.

“No-one is allowed in,” he says with an apologetic smile.

Why were the gates shut? It turned out that a couple of Banbridge supporters had been involved in abusing match officials during a recent game against Malone.

The club has a zero tolerance approach to such abuse and two of their supporters were brought to book and, after they had admitted to their actions, they were disciplined.

Just in case the message hadn't got through, the IRFU made the club play the UCC game behind closed doors.

That's the rugby policy and they stick to it rigidly – no half-measures.

Supporters are the life-blood of every club no matter the sporting code and I'm sure no-one at Banbridge enjoyed having to discipline two members who might well have volunteered their time to help out in the past. But Bann showed in no uncertain terms that they will not compromise on the standards they set and anyone who attends their games in future will think twice before they open their mouth to criticise an official.

YOU wonder how many grounds would be closed if the GAA brought in the same sanctions?

Last week in The Irish News the Moy club chairman expressed his disappointment at the lack of action taken by the Tyrone County Board after one of his players had had his jaw broken in three places and the team's manager was knocked out cold by an opponent during a relegation/promotion play-off match.

“I do think there'll be a fatality in Gaelic Football with the way lads are built now,” he warned.

He spoke out bravely and it wasn't a witch-hunt on his part, he wasn't after some trial-by-media vengeance against the other club involved. He had played the game himself so he knew all about the physical side of it – he understood it and even relished it - but he could see that, with all the gym work and strength and conditioning modern players are doing, there is grave danger ahead unless the GAA begins to take the issue of striking seriously and brings in sanctions that will actually have an impact.

That article on the Moy incident stimulated a number of online responses and here is one which is particularly pertinent: “Fines are futile and sanctions are generally petty and meaningless.

“No other code would or should condone this wanton thuggery carried out in the name of sport and under the umbrella of the GAA. It is long past time that those charged with the care of our culture and our children, lived up to their responsibility. They are only paying lip service to justice and selling our decent followers very short. Time to man-up because too often we are a man down!”

Now it's important to stress that players aren't getting assaulted on pitches throughout the country. The vast majority of our games are played in good spirits but that incident in Tyrone is by no means an isolated one.

Here's another example. Another club chairman (in a different county) was so troubled by the violence and the verbal abuse that had unfolded before him during an Ulster Club Championship match earlier this month that he messaged his club's traumatised supporters.

Describing the behaviour of their opponents “on and off the field” as “shocking” he added: “We apologise if anyone was annoyed watching this.

“We hope this does not deter you from supporting our teams going forward for the 2023 season. Once again we thank you for your continued support.”

Now this man has the best interests of the GAA at heart. His concern was that supporters would be put off getting involved with the club and wouldn't go to games because they felt physically threatened or intimidated by what had gone on.

And he is right to be concerned because if those same supporters went to a rugby match they would quickly realise that every effort had been taken to ensure they could enjoy the game without having to listen to a tirade of abuse from the man or woman standing next to them.

They might well decide that rugby was the place for them and their family.

There is a serious issue here for the GAA. We can't just assume that the public will keep turning up and supporting the clubs because there are more and more sporting options open to kids nowadays.

It is time for action and if the proper procedures are put in place and are driven by clubs then it would take less time than you might think for the message to get through.