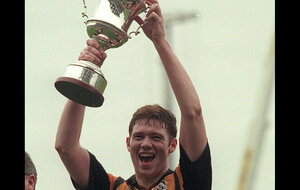 ANTHONY Cunningham is all too aware of the passage of time between his heyday in black and amber, and the Crossmaglen side he inherits as the south Armagh club’s new manager.

Where predecessor Stephen Kernan played alongside the likes of brother Aaron, James Morgan, Paul Hughes and Jamie Clarke, Cunningham has no immediate links to the current crew. Even Aaron Kernan, despite just finishing up his 22nd year at senior level, came on the scene a while after Cunningham departed.

“The half of this team weren’t even born when I was at it,” he laughs.

In the case of Cian McConville - son of Cunningham’s assistant, former Crossmaglen forward Jim – the crossover strikes a little more close to home.

“We always remember Cian was born on St Patrick’s Day one of the years we won the All-Ireland,” says Cunningham, “and Jim coming out shouting ‘it’s a boy, it’s a boy…’”

“One of the years we won the All-Ireland” speaks volumes of how readily success at the very top level came to Crossmaglen during those golden years.

Indeed, the day he describes – March 17, 2000 - it was Cunningham who climbed the steps of the Hogan Stand as Cross captain to accept the Andy Merrigan Cup after downing Dublin champions Na Fianna.

Now 22-year-old McConville, so similar in style to his father, forms part of an exciting attacking axis alongside Rian O’Neill and Jamie Clarke as new boss Cunningham bids to harness the talent at his disposal.

Despite being settled in Burren - where son Cian recently progressed to Jim McCorry’s senior squad - and managing some of their underage sides, as well as Whitecross and Louth outfit Geraldine’s, coming back to Oliver Plunkett Park was always the dream.

On Wednesday night, it was finally realised.

“It definitely was on my radar.

“To be fair, I probably needed to cut my teeth before I actually took it, but now’s the time and if I didn’t do it, I know I’d always regret it. It’s a big job – a big club with huge expectations, and rightly so. They’ve been there and done it, so why shouldn’t those expectations be up there?

“I’ve managed a few teams now, but this is the pinnacle for me. It’s an honour, and hopefully we can do it justice.”

Regarded as an astute reader of the game within the Crossmaglen changing room back in the day, former team-mates believe Cunningham has the necessary nous to move the club on and develop an emerging crew of exciting young players.

From a personal point of view, living outside the village will do him no harm as he gets to grips with the task at hand.

“I’m away from Cross as long as I was in it.

“The beauty of jumping into your car after training and coming out from that is great. You’re not bumping into players, bumping into parents, not continuously having that conversation or having to justify what has happened or what you’re doing.

“It definitely has its advantages. But I know I have a lot of work to do now, and this is a blank page for everybody.”