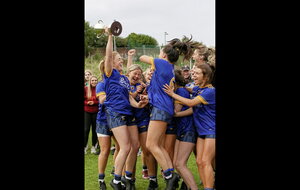 IT may appear slightly ambitious, presumptuous even, but a provincial decider was the aim for St Ergnat’s, Moneyglass this year.

It seems they haven’t set the bar too high even though they are contesting their first ever Ulster Senior Club Championship final on Sunday against defending champions Donaghmoyne. It’s where they want to be says one of the team’s young stars, Maria O’Neill and the success of the club, especially this year, winning ladies' football titles at all levels, is driving them on for more success.

“After our success in Antrim and getting through to the Ulster semi-final final last year, the aim for this year was to progress on and get to the final, as a team we’ve worked hard all year so it’s nice to see that that’s paid off and now were in the position we want to be in after two difficult games against Bredagh and St Macartan's,” she said.

“Last year played a massive part in our success so far this year. It was our first time in a long time, winning Antrim, so we were slightly unsure on what to expect coming into the Ulster stages, but even getting to the semis last year was an achievement and we’ve used it as a learning curve on what to expect in Ulster this year.”

Moneyglass last tasted provincial final victory in 2003 when they won the junior title.

Eighteen-year-old O’Neill wasn’t even born then and indeed her mum Sarah, a past player, could not play as she was pregnant with Maria at the time.

It’s no surprise that football runs in her blood. She plays alongside her older sister Sarah on the team, and they have become a formidable force with one in defence and the other in the forward line, not just for Moneyglass but for Antrim as well.

Her dad and two uncles have played for Antrim over the years while her aunts are also former Moneyglass players, and All-Ireland junior winners, Gerardine and Mary McCann, the former captaining her county to All-Ireland success in 2009.

“Growing up surrounded by so much football and playing it, playing at such a high level is something that every child aspires to do at some point in their career I just didn’t realise it would happen so soon which is a great thing because some people may never experience it,” she said.

“Although after growing up with so much underage success such as winning All-Ireland Feiles and All Ireland seven-a-side competitions the hope was always to fulfil our potential.”

O’Neill is relishing football right now, enjoying playing alongside club captain Cathy Carey, who she remembers watching as she was growing up, and playing both club and county with her sister Sarah, Orlaith Prenter, Anna McCann, Bronagh and Aine Devlin and Niamh McIntosh.

“It’s great getting to play with all of them. We have such a strong team with a lot of talent and experience. Cathy has been playing senior since I was younger and going from watching behind a wire to getting to play alongside her is great as I’ve learnt a lot from her.

“Playing club and county with Cathy, Anna, Órlaith, Bronagh and Aine is great as they’re always there to help me and I get to experience new things alongside them. It has helped us grow closer as a team. Playing with Sarah has many benefits such as having someone to do post-match analysis with and having someone to travel to and from games and trainings with. And when you need some brutally honest opinions Sarah’s doesn’t hold back!”

It has already been a memorable year for her with Antrim’s All-Ireland Junior success back in August and although she knows they are going in against one of the best club teams ever in Ulster she is looking forward to the challenge.

“I’m really excited for it. We’ve been working hard and preparing for it since the start of the year so it’s great that we’ve got ourselves to the position that we’re in.

“It’s not often you win an All-Ireland final and get the chance to win a club Ulster final in the same year so it would really make the perfect season if we could push on and win it and to win it with my club mates. We are also the first Antrim ladies team to ever make it to an Ulster Senior final so to win it would be making history for not only the club but the county.”

Time Out: Why Jerome Johnston sr had to go with his gut