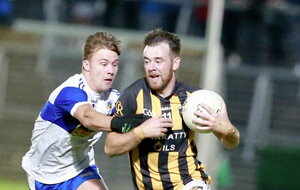 IN Callum Cumiskey’s lifetime his club Crossmaglen Rangers have won three-quarters of the Armagh Senior Football Championships – 21 out of 28.

They’d been in a dozen consecutive semi-finals since Pearse Og shocked them in the 2009 quarter-finals, a season when they were aiming for a 14th consecutive triumph.

So it’s no surprise that the word he chose to sum up his feelings after reaching the last four again by seeing off neighbours Dromintee in extra time was “relief”.

Cross’ eventually won by 10 points in the Athletic Grounds on Sunday night, 1-15 to 1-5, having led by two points going into added time in normal time.

Yet they’d trailed by two at half-time, 1-1 to 0-2, and were behind again in the second half with a man short after a red card at the end of the first quarter for wing-forward Caolan Finnegan.

Cumiskey, now into his second decade on the senior squad, admitted: “Relief, I suppose, is the word I’d pick out - good to get over the line, especially in a close encounter like that. I suppose going down to 14 men early on the game did us no favours, but I think we showed a wee bit of character to claw it back in normal time and then stretch out in extra time.”

Having come from five points down to beat another set of south Armagh rivals, Silverbridge, in round one, Cumiskey is happy that the Rangers are battle-hardened ahead of a semi-final clash against Maghery, who defeated them in the 2020 Final.

“Absolutely. I think it's just another stepping stone to where we want to get to. There's nothing wrong with winning tight encounters like that, they really build the team.

“Periods of that game they were kind of getting away from us, but we clawed it back and a couple of younger players came up with big scores and really put us in the driving seat come the last 10 minutes.”

Cross’ let that lead slip, with Dromintee forcing a 1-4 to 0-7 draw and extra time, and Cumiskey admitted they’d heard stern words from their management at that stage:

“I think the fuel tank was on red coming in there for extra time. We got a bit of a bollicking, yeah, excuse the French, but you need that - the head might wander come the end of the game when the body does get tired. Fair play to the boys [the management] - they definitely rise us and I think we answered the call.”

That final loss to Maghery two years ago was the first for Cross in a county SFC decider since 1982 against Carrickcruppen. In the interim, they’d won, quite incredibly, all 23 finals they had contested – but they lost again in last year’s decider, stunned by Clann Eireann of Lurgan.

Cumiskey agreed that those defeats would not be forgotten: “No, you can’t push it to one side. It does kinda add salt to the wounds when you look back at clips and see things that you could have done better.

“We definitely have a point to prove as a collective group and the best way we can do that is go out every day and try to get a victory.”

The onus is always on players donning the famous black and amber jersey to win Armagh, at the very least, and Cumiskey embraces that challenge: “I think it's a healthy expectation. It drives you on as a younger age player coming up through the ranks.

“Listen, as we were younger players under 14, 16, 18, we were looking over at senior members winning county championships and we wanted to be out there some day doing the same.

“I don't think it’s a weight on our shoulders or pressure, to that extent, it's just something that we want to achieve as our own group of players.”