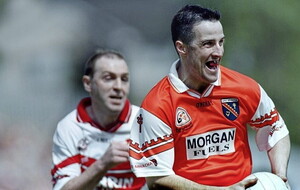 Armagh's Barry O'Hagan has taken up a coaching role with Kilcar

THE hunter becomes the hunted in Donegal as St Eunan's, Letterkenny begin the defence of their SFC crown this weekend at home to St Naul's.

Rory Kavanagh's side aren't expected to have too much trouble there against an out-of-sorts Mountcharles outfit that recently dropped to the third tier of the All-County League.

It's early days in the 16-team SFC in Tír Chonaill. However, there is no doubt that the clear and present danger to the Letterkenny men's title are usual suspects Naomh Conaill and Kilcar.

Gaoth Dobhair – Ulster club champions in 2018 – have been hit with a spate of injuries and departures and there is no doubt they have slipped down the north west pecking order this season.

And boss Trevor Alcorn insists the weekend's encounter against lowly Ardara might not be as straightforward as most are predicting.

“Daire Ó Baoill has gone travelling, Naoise (Ó Baoill) is in Canada. We're losing Eamon Collum now after the weekend, he's heading off also. Odhran MacNiallias has picked up an ankle injury, so has Michael Carroll. Niall Friel is out for the foreseeable future with a bad ankle injury.

“And, of course, the loss of Odhran McFadden-Ferry (cruciate) is massive. It's a huge blow for us and for him personally.

“But Gaoth Dobhair are one of the biggest clubs in this county. There is always expectation there. And even with the set-backs we have that doesn't change.”

Naomh Conaill, who open away to Michael Murphy's Glenswilly, have one of the strongest squads in the county. And boss Martin Regan says they are in a good place, even if two influential players aren't quite ready yet as they return from cruciate injuries suffered last year.

“We are pretty much at full strength,” he said. “Eoghan McGettigan and Ultan Doherty are still working their way back from serious injuries.

“They are a few weeks away yet. We're hoping that they will be able to get back, but they are young players and we don't want to rush them.”

Naomh Conaill, denied an historic 'three-in-a-row' last term by St Eunan's re-emergence, have had many big battles with the Glen over the last 15 years and the clubs know each other well.

It might be a different Glenswilly team now to the one that won three senior championships, but Regan says their new players still have the same attributes as the ones that went before them.

“The personnel might be different but there is still a similar outline to what we would have faced down through the years.

“They have a lot of big men around the middle with Shaun Wogan, (Caomhin) Marley, (Michael) Murphy, and 'Copper' (Gary McFadden).

“They will be well set up defensively and they also have that threat of Murphy in attack.”

Kilcar last claimed the Dr Maguire Cup back in 2017 but they did win the Division 1 league title this season with a number of younger players catching the eye.

They shouldn't have too many issues seeing off Milford, at home, on Sunday.

“We were delighted to win the league considering where we were at the start of the year,” Cunningham explained. “The goal is still to win the championship, but Eunan's and Naomh Conaill are probably still a bit ahead of us and we have to close the gap.”

Cunningham has recruited Armagh U20 manager Barry O'Hagan as his coach.

“Barry has been great for us. He's a busy man but he's football mad. His knowledge and experience is second to none.

“It was an exciting opportunity for us earlier in the year when Barry was available and we're over the moon with how things have gone.

“Jim McGrath is also involved with the mental side of things. I think with what the boys have gone through over the last few years, it would have been naive of us not to address it.

“Jim is not a native of Kilcar but he is residing in the area and he's working well with the group.

“We have others looking after stats and video analysis and so on, and we have a good backroom team.”