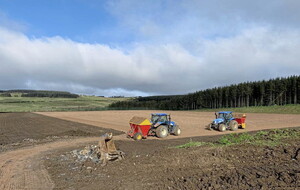 Work being carried out at Lamh Dhearg Picture: Jim Corr

LAMH Dhearg member Maura Larkin says she will feel an “overwhelming sense of pride” when the Hannahstown club officially opens its brand new pitch on Sunday after five years of “blood, sweat and people’s hard-earned money”.

To build a second full-sized grass pitch on the club’s existing Hannahstown Road site during a pandemic, and with no grant aid, is a remarkable feat from its members and their extended families who shared the vision of stalwarts Frank Fitzsimons senior, Joe Finnegan and Pat McCague, affectionately known as the “three amigos”, back in 2017.

The ambitious initiative that will have a transformative impact on the club situated on the edges of west Belfast had humble beginnings.

It started with “rapping people’s doors” and asking them to become patrons of ‘Red Hands – Pitch In’.

Maura, who’s heavily involved in the running of ladies teams at Lamh Dhearg, explained: “Three club elders Pat McCague, Frank Fitzsimons, Joe Finnegan had this steadfast belief that the money would come – just let’s build it. They were the ones who started the ball rolling and the ball has continued to roll ever since.

“Around 2017/18, they took it upon themselves to knock on people’s doors. It’s hard to go and knock on somebody’s door and ask them for money… But they initially gathered about £50,000 through club members and their families and that was enough to start the project.”

Maura added: “The club had purchased land adjacent to the existing pitch in 1993 so back then they were looking at potential growth of the club and that was just nine years after we'd opened our first pitch. But it was getting the money to build it.

“The committee was formed and the fundraising initiative was called ‘Red Hands – Pitch In’. We were asking people to commit to a standing order to help pay for it for a couple of years, or if people wanted to make a one-off donation. We now have something 240 ‘Pitch In’ patrons donating on a monthly basis.”

There were golf classics, national GAA draws, donations, standing orders and even the Lamh Dhearg kids pitched in by trick-or-treating and selling lemonade at the beach.

“When we started we thought there would be other fundraising grants available to us but there was nothing because lockdown hit – so this has been achieved by the pure blood, sweat and hard-earned money from club members, and that is brilliant.”

Lamh Dhearg is involved in all codes of Gaelic Games and with Ladies football and camogie growing at an exceptionally fast rate, pitch space was becoming a major problem to accommodate all its teams.

“We compete at U12 right up and we just didn’t have the facilities to meet the demand. We were going out to try and block book council facilities and then you couldn’t always get them, and they’re expensive for clubs that don’t have a lot of funds.”

The Lamh Dhearg club continues to pursue excellence on and off the field. Just three years ago, they won an Irish News Club and Volunteer Award for how its members tackled and raised awareness of mental health issues.

In 2018, through the ‘Darkness Into light’ campaign, the club raised £38,500 for Pieta House and Suicide Awareness and Support Group. The club continues to lead the way in the sphere of mental health.

A special parade to mark the opening of the new pitch will leave Hannahstown chapel on Sunday before making its way up the hill to the ground.

“Whenever we see all the teams out on the pitch there will be a sense of pride and ownership, just the fact that we’ve done this ourselves,” said Maura.

“Overwhelming pride will be the feeling, the sense of family and community will be embedded in that parade with the different generations. Just to have everybody together.”