How the Republic of Ireland players rated against Scotland 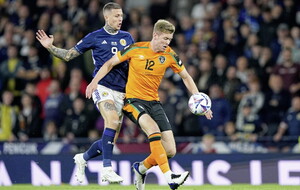 Nathan Collins impressed at the centre of Ireland's defence

Gavin Bazunu: Brilliant fingertip save to deny Ryan Frazer in the second half. Had no chance with Hendry's header, which went in off the post, and Christie out-foxed him with the penalty. 6.5

Matt Doherty: Always an outlet on the right wing and was tidy in possession. Should at least have hit the target with a goal chance in the second half. 6

Nathan Collins: A tower of strength at the heart of the Ireland defence and able to step into midfield too. Cleared at the back post under immense pressure in the second half. Used the ball well. 7.5

John Egan: Superb finish on the half-turn in the first half. He picked up in-form Lyndon Dykes throughout the game and didn't give him a sniff. 8

Dara O'Shea: Brilliant through-ball for Parrott's first half ‘goal'. Had his hands full picking up Scotland runners from midfield in a three-man defensive partnership. 6

James McClean: Winning an early 50-50 against John McGinn set the tone for a battling performance. An outlet on the left, he whipped in one brilliant cross and had a couple of half-chances. Cutting edge wasn't quite there. 6

Josh Cullen: Booked in the first half and could have been sent off for a mistimed tackle soon after. Stephen Kenny's Mr Reliable in the middle of the park, he acquitted himself well against the Scots' much-vaunted trio. 6.5

Jayson Molumby: Vital contribution for the Ireland goal when he out-jumped McGregor to keep the ball alive. Brilliant interception which paved the way for Doherty's chance. 7.5

Jason Knight: Given licence to get forward whenever he could, the versatile Derby County clubman was busy in the midfield and pressed energetically when Scotland tried to play the ball out from the back. 6

Troy Parrott: Took one chance brilliantly that wouldn't have counted but missed another – much easier – that would have. He worked hard alongside Obafemi and forced the corner that led to Egan's goal. Should have given Ireland the lead in the second half but a weak shot was easily saved by Gordon. 6.5

Michael Obafemi: The Scotland defence couldn't live with his pace and he broke from his own half at every opportunity when Ireland turned the ball over. His breaks helped win the corner that led to the goal and created a gilt-edged chance for Parrott. 7

Chiedoze Ogbene: Replaced Obafemi after an hour and gave Scott McKenna a few headaches before the Scotland defender got to grips with him. 6.5

Seamus Coleman: The Everton veteran was on target with a deft flick after he replaced Matt Doherty. 6

Callum Robinson: Creative on the left wing in the closing stages. 6

Alan Browne: You cannot raise your arms in the box these days and by doing so he cost Ireland the game. 5

Robbie Brady: Not on long enough to be rated.