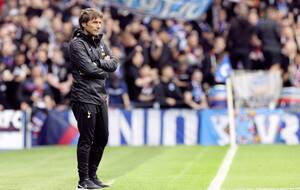 Antonio Conte has made huge improvements since taking the reins at Spurs and the north London club could be next best behind Liverpool and Man City this season Picture: PA

WHETHER the Premier League actually is the ‘best league in the world', as we are so often told, is open to debate, but what can barely be questioned is that most of the best managers around ply their trade in England's top flight.

And the likes of Pep Guardiola, Jurgen Klopp and Antonio Conte will need to call on all of the tricks of their trade in the new season, which will be like nothing that has ever gone before.

With the Qatar World Cup plonked in the middle of the club campaign, every manager will attempt to utilise his full squad and rest and rotate their stars to make sure his side last the course from the first weekend in August right through to the last days of May.

It is going to be a challenge for even the deepest squads over the coming months, and recruitment teams will be searching for reinforcements right up to the end of this month's transfer window.

There will be 16 rounds of fixtures in the Premier League before things grind to a halt on November 13, picking up again on St Stephen's Day, just eight days after the World Cup final.

That presents a gruelling workload for any player whose country goes deep into the tournament in Qatar, and there is every chance many Premier League stars will need a week or two off even after the club action resumes.

With all that in mind, making predictions about what the season has in store might be a bit more tricky than is usually the case, although the established big guns probably have more of an advantage than before, especially with the introduction of five substitutions.

And in the recent history of the Premier League, there can be little argument that Manchester City and Liverpool have been the heaviest hitters of all.

The two clubs played out another thrilling finish in May, City eventually clinching a fourth title in the last five years thanks to a thrilling comeback at home to Aston Villa.

That was enough to scrape home by a point from Klopp's Reds, who had been 13 points adrift in January before putting together a stunning run of form that went very close to delivering an unprecedented quadruple.

It says so much about the hunger and drive under Klopp that walking away with just the two domestic trophies was slightly underwhelming in the end, and there will be huge motivation to capture a second Premier League title.

That tally would already be at three were it not for the consistent excellence of Pep Guardiola's City, who have mastered domestic competition but have still to figure out the Champions League.

Guardiola won't rest until he's conquered Europe, but he also knows the value of the Premier League, and adding the prolific Erling Haaland – as well as Leeds midfielder Kalvin Phillips – to his squad for the new campaign gives City a different option after a couple of seasons playing largely without a number nine.

Pep's men deserve to go into the new term as odds-on favourites at no bigger than 4/6, and it would be a brave man who goes against them, especially as more new faces are sure to arrive in the coming weeks.

Raheem Sterling, Gabriel Jesus and Oleg Zinchenko have moved on to Premier League rivals, but none were key men last season, so City remain the team to beat.

And yet, for a few reasons, my feeling is that Liverpool can just about get the better of their rivals in a long campaign and get their hands on the silverware again.

Klopp is possibly the only big club manager across Europe who isn't looking for new faces, with the key signing of Benfica striker Darwin Nunez sealed long ago.

The German would rather have kept Sadio Mane in his ranks after a return to top form last season but he has moved on to Bayern Munich, meaning Nunez will have a big role to play from the off.

Luis Diaz hit the ground running after joining in January and can kick on again, while Mo Salah has penned a new contract and shows no signs of slowing down in front of goal.

The elegant Thiago Alcantara has also really found his feet and could be the star man for the Reds.

The Anfield men have a very settled look and, in a strange season, that familiarity might prove key.

Another thing in their favour is that a number of their main men won't be heading to Qatar, with Salah, Andy Robertson and Joel Matip among those who can put their feet up, while the likes of Ibrahim Konate and Jordan Henderson may be in World Cup squads, but are unlikely to see too much action.

All things considered, and with the last few seasons proving there is very little between the top two, the bet must surely be to back Liverpool at 5/2 with Bet Victor, rather than City at 4/6.

The more reasoned punters might opt to take a bit of risk out of things and back the dual forecast, but at 8/11 it's not a route I'm that keen on.

Of course, the upper reaches of the table are about more than just two sides, and Spurs, Chelsea, Arsenal and Manchester United will all hope to get closer to the top pair come next May.

Thomas Tuchel's Blues looked likely to make it a three-horse race for the title at one stage last season, topping the table in December, but a poor run of form over Christmas saw them fall away, and they eventually finished 19 points off the searing pace set by City.

The early progress made in the first 12 months of Tuchel's reign slowed down in the second half of last term, and the loss of defensive stalwart Antonio Rudiger will be a blow to a side built on being tight at the back.

Kalidou Koulibaly is an able replacement, while Sterling will be tasked with providing the goals Romelu Lukaku failed to deliver.

I'm not sure the former City man provides much different from what Chelsea already have, however, while Tuchel has been vocal in demanding more recruitment from new owner Todd Boehly.

The business conducted by Spurs this summer has been far more impressive.

Conte has quickly stamped his own ruthless streak on the club, delivering Champions League football after a strong finish to last year, and quickly adding depth and class to his squad.

Ivan Perisic and Clement Lenglet will bring European nous, while Yves Bissouma could be an inspired signing from Brighton, and Richarlison may find his best form in a strict environment under Conte after appearing frustrated for most of the time at Everton.

Spurs definitely have the look of a team on the up, and that's before we even consider Harry Kane and Son Heung-Min, whose combination reached new heights last term.

It is a bit early to regard them as title contenders at 14/1, but there is every reason to think they will be best of the rest, and they look a fine bet at 7/4 (Coral) without City and Liverpool.

Arsenal and United would like to think they can be in the mix for the top four at least, and both clubs have been active in the transfer market, and will continue to be so.

The Gunners looked nailed-on for Champions League football before a stuttering end to the 2021/'22 campaign, which summed them up as a whole under Mikel Arteta.

The Spaniard has opted for youth, and inconsistency always comes with that.

Jesus and Zinchenko will add a winning mentality, while Bukayo Saka and Martin Odegaard always impress, but Arsenal still seem a bit short of those who finished above them in May.

United, meanwhile, are under new management, with Erik ten Hag swapping Ajax for Old Trafford and promising a high-intensity, no-nonsense approach which is badly needed in a dressing room that essentially downed tools last season.

Ten Hag will definitely provide more coaching than either Ole Gunnar Solskjaer or Ralf Rangnick, but the positivity of his new regime has been tempered somewhat by more dithering in the transfer market, with United once more embroiled in sagas that don't happen at other leading clubs.

The entire summer has been spent trying – and thus far failing – to entice Frenkie de Jong from Barcelona, while Cristiano Ronaldo wants out, if anyone will take him.

Lisandro Martinez and Christian Eriksen are good signings, but a few more are required if United are to break back into the top four, never mind challenge for the title.

Therefore, last season's top four may well make up those positions again, and the 5/2 quoted by Sky Bet about City, Liverpool, Spurs and Chelsea being the leading quartet in any order makes great appeal.

It is sure to be a strange season, but the same teams are likely to be fighting it out for silverware come the end of it.

Derry's Glass act eases them into next round of FAI Cup