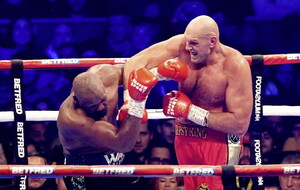 TYRONE McKenna will, as always, be an unmissable segment of what should be a terrific night of boxing at the SSE Arena this weekend.

McKenna challenges Liam Taylor (25-2-1) for the WBO European welterweight title in his second fight at 147lbs and the latest in his series of all-out battles could unfold against the Englishman.

Taylor stopped experienced Martin Harkin to win the ranking title in October with arguably the performance of his career - he dropped Harkin three times - and so will come to Belfast full of confidence against tall southpaw McKenna who has been training for the fight with Pete Taylor in Dublin.

“I've been down in Dublin from Mondays to Fridays training hard with Pete. We've worked a lot on my footwork and I think it has really improved in this camp. I've been sparring lethal, I'm feeling really fit and I'm just ready to go to war now.”

The Jenkins fight was McKenna's first at welterweight and he has focussed on putting on some extra muscle as he “grows into” the new weight.

Jenkins was a formidable test and McKenna beat the fearless Welsh scrapper in a toe-to-toe slugfest from the opening bell. The first five rounds were relentless action and a strong finish from McKenna allowed him to edge a close fight – all three judges (two of them by a single point) scored it in his favour.

“In the lead-up to it I had it my mind to box, I was thinking: ‘I'll stick to boxing' but once you get into that ring and you have 10,000 fans there screaming for it, you just want to give them what they want – they want blood and they want wars.

“I tend to get dragged into wars sometimes but it was enjoyable. The fans loved it, I loved it. It was an insane pace for the first five rounds and then I started to box on the back foot and I thought that's what won me the fight, the boxing.

“I spar completely differently to how I fight. In sparring I have very good head and upper-body movement and then I get in to fight… I just seem to get into wars every time! But that's what puts bums on seats and it's what I love doing and the fans seem to enjoy it.”

Taylor, his opponent on Saturday night is 31, was stopped inside two rounds by highly-rated England-based Russian David Avanesyan (who challenges Terence Crawford for the world title in the US, also on Saturday night) late last year.

He has rebounded with two wins and beat Harkin in October to win the WBO European belt he'll defend on Saturday night. McKenna wants his belt and the welterweight ranking that goes with it.

“This fight is all about getting me world-ranked and in contention for the big names,” he said.

“Taylor is a decent fighter, he comes to fight. He is aggressive, he throws a lot of punches and he's high-tempo like myself. I think it will be an entertaining fight but he has a lot of flaws, he is a bit wild and I think I'll be able to look good against him.

“He's a fighter that I think will bring out the best in me and I'll look good on Saturday night. It's hard to say how it will go – I try to finish them all early but they don't seem to want to go away and it ends up being a war.

“We'll see what happens. We'll see how much he can grit his teeth and fire back. Or will I overwhelm him? I don't know but I'm very fit and I'm ready for a 10-round slugfest war. It's whether he's ready for it or not.”

Beaten just once in Belfast – and that defeat was against world class operator Jack Catterall – McKenna thrives on the support of his fans. Last time out, the SSE Arena was rocking and it will be again on Saturday night.

“It was unbelievable,” said McKenna.

“Although it's a massive arena, it still feels very compact and the atmosphere is unreal. It's a great venue for boxing and there isn't a bad seat in the house. I love it.”

TYSON Fury fired off a volley of insults into Oleksandr Usyk's face when the Ukrainian heavyweight champion came to ringside after ‘The Gypsy King' had predictably dealt with over-the-hill Dereck Chisora on Saturday night but Ricky Hatton senses that Anthony Joshua will be Fury's next opponent.

“The boxers want it,” said Hatton.

“I can't put my finger on what it is. I'm pretty confident we're going to get it over the line sooner or later though. I don't think it's anyone's fault in particular either. It just takes time for big fights like this to get agreed. You've got a different promoter, different TV company - it's frustrating.”

If the English rivals do finally meet, Hatton says can't see anything else but a Fury win.

“I think Tyson is just too good in every department,” he told Fair Betting Sites.

“No disrespect intended to AJ and what he's done, I just think that Tyson has all the advantages. He's got the boxing brain, I think he can change his tactics mid fight and stuff like that.

“He's so versatile: He can go to war, he can box at a distance, he has a wonderful defence, he can go southpaw, orthodox… I don't know if AJ, who has done the country really proud being two-tie heavyweight champion of the world, Olympic gold medallist, is good enough to suss out the puzzle of Tyson Fury. I think he'd just be too clever and too good all round.”

Seconds Out: Dobbins hoping to make up for lost time with Derry ring return