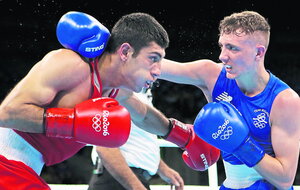 AS 2022 nears its end, the long-term future of Olympic boxing has never hung so precariously. But, while politicos and bigwigs at the top of the sport hold its fate in their hands, what of those emerging young fighters watching, worrying, in the wings?

Carl Killyleagh is one such example. The 14-year-old, a fourth year student at St Mary’s CBGS, first walked through the doors of St Paul’s Boxing Club eight years ago.

Since then, he has become increasingly immersed in the noble art.

During his time at the west Belfast club, Killyleagh has watched Brendan Irvine qualify for two Olympic Games.

And as Irvine mulls his future in the fight game, St Paul’s have another potential star bidding to nail down a spot at Paris 2024, keeping the production line moving.

Dylan Eagleson has had a break-out year, landing a silver medal at May’s European Championships – his first-ever outing at elite level – before bringing home gold from the Commonwealth Games three months later.

Still just 19, he is as impressive a talent as Ireland has produced in many years, already drawing comparisons with Michael Conlan. Whether he chooses to campaign at 51kg or 57kg in order to chase his Olympic dream, Eagleson looks sure to be among the leading contenders for Paris.

When you are seeing talent like this day in, day out, how can you not share their ambition?

And yet, for the likes of Killyleagh, the future – at least in Olympic terms – is unclear. Having saved its skin in time for the delayed Tokyo Games, another battle for survival is already under way as Los Angeles 2028 looms.

Carl Killyleagh will be 20 by the time those LA Games roll around – the same age Irvine was in Brazil. He would love nothing more than to emulate his club-mate, but knows that opportunity could be snatched from his grasp before a punch is thrown in anger.

“Brendy was down taking me on pads the other night - he’s somebody I’d have looked up to since I’ve been here really,” says the talented teenager.

“He has been to the Olympics twice – most people can only dream of getting to the Olympics once, but you can see how he managed to do it, because he has always been so dedicated and given everything to boxing. That’s the way you have to be.

“All the stuff that’s going on in the background, and the possibility there will be no boxing at the Olympics, it’s devastating. The older you get, the more you’re part of boxing, the more you want that to be you.

“I’ve seen Brendy go to two Olympic Games, and then Dylan is hoping to go to the next ones. After that, who knows what’s going to happen?”

It’s that uncertainty which is already threatening to have a detrimental impact on the sport, even when faint hopes continue to hang by a thread.

Like coaches across the country, raised on Irish success at the greatest show on earth, Ralph McKay has been selling the Olympic dream to young kids for over a decade. He has seen the difference boxing can make to lives in times of trouble, and how that light at the end of the tunnel sustains those most dedicated.

Irvine had to overcome major obstacles along the way, yet not once was defeat countenanced because he also believed he could make it to the top. And he did.

But without that end goal, what is going to keep the best in boxing?

“The Olympics is the pinnacle of the sport - to take that away, it would dampen the spirit of the Olympics as a whole,” says McKay.

“Coming up to competitions Carl Killyleagh is out running before he goes to school, at night time and the weekend he’ll be putting in the work. That’s the commitment he has, and all because he wants to try and go as far as he can.

“When you have kids like him aspiring to be Olympians, coming through the club and seeing Brendy and Dylan, if that dream isn’t there for the kids, they’ll walk away from the sport. It’ll kill boxing at grassroots.

“If you look back through the years and you see guys like Muhammad Ali, Roy Jones jr, Floyd Mayweather jr, that’s where these guys first make a name for themselves. Years later, that’s who everybody’s talking about, who everybody’s looking up to. That’s who young boxers grow up wanting to be like.

“Even looking closer to home, Belfast has always produced Olympians, so different generations talk about different boxers from down through the ages. It would be awful if the future generations didn’t have anybody to look up to, or to relate to.

“It seems to be more politics than sport causing so many of the problems at the top - these countries can sit around a table at the G8 summit, why can their boxing equivalent not do the same?

“There’s still time, and we can only hope a resolution can be found, because losing boxing from the Olympics is unthinkable.”

Holy Trinity had seven champions at the weekend’s Ulster 9 County Boy/Girl 4-7 Championships – with one more final to go as Summer Fleming’s final takes place next week. Aleesha Deronja, Cormac Fegan, James Kelly, Jude Molyneaux, Logan Rice, Kyle Smith and Joseph Mallon (pictured with the Turf Lodge club’s coaches) all had their hands raised at Corpus Christi Boxing Club. Cormac Curley took silver after losing out on a close points decision, while Carlo Braniff and Conal Burns will both bounce back better from semi-final defeats
John Donaghey (left) of Star of the Sea ABC covers up as East Down’s Oisin Lowry counters during their 80KG B5 Ulster final at the weekend. Donaghey went on to win. Picture by Mark Marlow