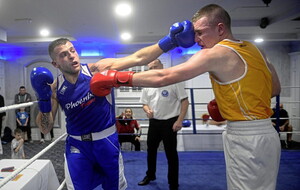 IT is hoped that the Harry Cunningham Memorial Cup can become an annual competition, after the inaugural event in honour of a Belfast boxing stalwart proved a roaring success.

There were 30 fights across two nights as a County Antrim team - alongside representatives from Dublin and Westmeath - went toe-to-toe with opponents from Wales, Cyprus and Italy.

And while it was the visitors who triumphed on both nights, spectators were treated to some storming contests as the stars of the future traded leather at Belfast’s Beechlawn Hotel on Friday night, then Corpus Christi Boxing Club on Saturday.

The memorial competition was a fitting tribute to Harry Cunningham, the late Saints coach and Antrim County Board vice-president who was responsible for some of the country’s top boxers enjoying their first taste of international competition in a yellow vest during a long involvement at grassroots level.

And Liam Corr, a Belfast Boxing Strategy development officer, hopes it is the first of many.

“We want this to be an annual thing in Harry’s memory,” he said.

“It gave a lot of kids who maybe hadn’t boxed for Antrim or at international level a first taste of it. That’s what Harry was about – trying to give as many kids as possible across Belfast and Antrim the chance to box internationally… even myself, I boxed for County Antrim against Cyprus once upon a time.

“It gives kids a chance to box against different styles and get the kind of experience that, one day, will stand to them if they go on to box for Ulster or Ireland. It’s sort of a starting point so that you’re not thrown in at the deep end, where the first time you box for Ireland is the first time you’ve boxed internationally.”

And the quality on show across both nights showed why such international ventures are always worthwhile – whether at home or abroad.

“It was top class,” said Corr.

“When you see the results it probably looks a bit bleak from a County Antrim perspective because we lost both nights, but you’ll also see a lot of 3-2 decisions – that’s not because of poor judging, but because that’s how tight some of the fights were.

“Jamie Graham against the Welsh champion [Henry Janes] on the first night was an absolute coin-flip – a cracking fight to watch. The place was buzzing after it.

“The Welsh kid had his family over, all Jamie’s family were there, his daddy was in his corner. It was a great fight, but that was just one of quite a few over the two nights.

“You can’t put a price on gaining that kind of experience against quality opponents.”

The Cunningham family came out in force at the weekend too – though Harry’s son, Liam, was unable to attend as he is part of Ireland’s coaching team at the World Youth Championships in Spain.

“It’s a shame Liam couldn’t be there because he was an integral part of making it all happen, helping out and doing a lot of the match-making,” said Corr.

“Liam was subsequently asked to go to the World Championships, a great honour for him, but the rest of the family were all there at the weekend, which was great to see.”

A forever sidekick of the club's top boxing coach, the late Barney Savage, he was heavily involved during the boxing heyday of the Bosco during the 1960s when the star pugilist was international light-middleweight Eamonn McCusker.

"Jim Scullion was a dedicated Bosco man, whose son Brendan emerged as a top boxer and Ulster champion after I retired from the ring," recalled 77-year-old McCusker.

"Jim, a very decent man who lost his wife Doris seven months ago, was a great supporter of amateur boxing, and during a time when we ran massive international-style boxing shows in the Castle Ballroom.

"Jim was a good lad, also an excellent athlete, a top runner. He took the roadwork three nights a week from the gym. I remember I usually finished last, way behind Jim. I couldn't keep up with him. He was also a leading high and long Jumper, and a runner when winning at our local sports day.

"I joined the Bosco boxing section around 11 years of age after having one juvenile contest with Albert Uprichard's Club at Laurencetown. Tommy Savage and his cousin Barney resurrected the boxing in the Bosco, so I moved there. Jim later came in. Those were great times."

"I might have had five Ulster senior titles but was floored by the flu in 1966 and couldn't defend the title - a year when there was no entry. I could have taken a walkover result. I successfully defended the title in 1967 and then had following wins in 1968 and 1969."

With Barney and Tommy Savage and Jim Scullion prompting the polished puncher, McCusker took the national titles in 1965, '67, '68 and 196, also losing in the 1966 decider to Gus Farrell.

In 1966 McCusker boxed for Northern Ireland in the Commonwealth Games at Kingston, Jamaica, but went out in the first series. Two years later it was the same outcome in the Mexico City Olympic Games, beaten there by the eventual silver medallist.

He also competed in over 20 full Irish international contests, and in three European senior championships - in East Berlin (1965), Rome (1967) and Bucharest (1969).

Following retirement from the lengthy ring career he switched to participating in Gaelic football, and won an Armagh 'B' championship with Lurgan's Clann na Gael.