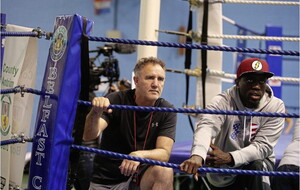 Former Irish head coach Billy Walsh, who is now in charge of Team USA, admits he fears for the future of amateur boxing. Picture by Hugh Russell

THE Olympic dream and amateur boxing have always gone hand in hand – until now.

Just think of those who have shot to prominence on this stage and you will quickly have compiled a list of some of the best ever to lace up gloves - Muhammad Ali, ‘Sugar’ Ray Leonard, Teofilo Stevenson, Floyd Mayweather, Katie Taylor…

There are many, many more besides, each with their own tale to tell of how Olympic glory or the bitter taste of defeat shaped them on their journey towards the professional ranks.

Boxing clubs across the country - across the world - sell the Olympic dream. Now, though, it is in grave danger of turning into a nightmare.

That amateur boxing would no longer play be a part of ‘the greatest show on earth’ remains unthinkable, but it continues to edge closer to an unfortunate reality following years of turmoil at the top of the game.

In doing so, it is widely assumed that any hope of boxing securing a place on the programme for Los Angeles 2028 has been shattered – with the International Olympic Committee having previously expressed "grave concerns" over the IBA under Kremlev's leadership.

The IBA is already barred from organising the Paris Olympics in 2024, where boxing will be administered by an IOC-appointed task force, following the example set at the delayed Tokyo Games in 2021.

However, the IOC's initial decision indicates that it has little appetite to repeat that process for 2028, and it will require a remarkable shift in governance to convince Olympic chiefs that boxing deserves to return to the programme.

Billy Walsh is a long time in the game, and thought he had heard and seen it all. When these threats emerged following the judging scandal at the 2016 Rio Olympics, there was always hope – if not quite confidence – that the whole sorry mess would be sorted out eventually.

Now, he’s not so sure. For a man who boxed for Ireland at the 1988 Olympics in Seoul, and would go on to lead Irish teams at the 2004, 2008 and 2012 Games before taking up a role as head coach with Team USA ahead of Rio, the current situation is a sorry one.

And, as with the issues that have continued to blight amateur boxing closer to home – the same issues which led to his move Stateside seven years ago – Walsh is increasingly frustrated at the manner in which the sport is being let down by those who run it.

“At the end of the day, it’s young boxers around the world who are suffering because of the inadequacy of the people above them,” said the Wexford man.

“We have one of the greatest sports in the world, but governance seems to let us down all the time. It’s very frustrating for anybody who’s working at grassroots level.

“There’s guys who might never have a champion, but they’re taking kids off the street, they’ve made them better people and changed their lives, gave them hope and taught them discipline.

They’re the real champions, the coaches who have done all that and are part of the community.

“I saw my dad work with kids and match them so they weren’t going to get hurt, get them a win sometimes just to make the kid feel better for themselves, so they feel they’re part of a team, part of something.

“That guy might never win a county championship, but you’re making better people out of them. Those are the real heroes, and they’re the ones being sh*t upon in the middle of all this.

“This is a really sad day for boxing, particularly at grassroots level. If you’re selling an Olympic dream to a kid, where is the purpose for them now?”

From his own perspective, having a home Games on the horizon was a huge incentive for American boxers coming through the ranks.

When Walsh first arrived in America, the significance of Olympic qualification – and that once-prized medal – had slipped down the order of priorities as more and more athletes turned over to the paid ranks.

He has helped steady that ship but, in the wake of these latest developments, selling the dream is becoming increasingly difficult.

“We’re working on developing talent already for LA – they’re already in the system,” he said.

“But, if boxing isn’t going to be in the Olympic Games, why would kids at that level stay amateur?”

The 17-year-old, who represented Ireland at the European Youth Championships in Bulgaria earlier this year, added to his burgeoning reputation when he defeated reigning English ABA champion Lewis Cocksey in the 48kg final.

Mac man Reilly produced a brilliant performance, with coaches Martin Lindsay and Frankie Slane clearly delighted too as their man’s hand was raised.

“He has just moved up to 48kg and we took a chance heading down,” said Lindsay.

“We knew it would be a tough fight but he’s boxing really well at the minute, so hopefully a big year ahead.”

Lavery, who took the 2020 Ulster elite title at 60kg, was in impressive form and led the way for the County Antrim team.

Boxing for the first time since the Commonwealth Games in Birmingham, JP Hale and Jake Tucker both returned with silver medals, as did St John Bosco light-fly Padraig Downey, while Holy Trinity’s Jon McConnell had his first international bout at elite level.

ST Paul’s duo Dylan McShane and Jack Weatherall, and Holy Trinity’s James Kelly, are part of a 24-strong Irish team who travelled out to Italy at the weekend to step up their preparations for the European junior championships.

The action gets under way in the seaside resort of Montesilvano today, with the finals taking place on October 4.

THE Ulster senior and novice championships get under way at the Dockers club tonight.

There promises to be some top quality action across the three days of competition – tonight, tomorrow and Thursday, with some of Ulster’s rising stars on show. Boxing begins at 7.30pm.