Dylan Eagleson lives up to billing to shine on big stage 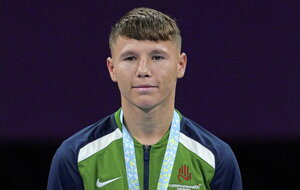 IT was only when his baby face flashed up on the big screens inside the NEC Arena that the magnitude of Dylan Eagleson’s achievement hit home.

It is just five months since Eagleson turned 19. Yesterday’s brilliant comeback victory over all-action Ghanaian Abraham Mensah was only his seventh fight as a senior boxer, after a glittering youth career was interrupted by the Covid-19 pandemic.

Yet here he stands, European silver medallist and Commonwealth Games champion, the youngest of all the podium-toppers in Birmingham. Is it any wonder he has been talked about as a potential star of the future since his early teens?

Living up to the hype, of course, is another matter entirely - and to do so in such sublime fashion only adds to a reputation that will continue to grow.

After losing the first round before a scrappy first half of the second, it looked as though silver might have to do once more. But the Bangor boy dug in to control the final minute, picking off Mensah and coming off better from a handful of trades.

The judges liked what they saw and, after that, there was no looking back. Eagleson smiled as he came out for the third before putting on a clinic to leave no doubt that he would be bringing home gold; boxing, fighting, whatever way you like it.

Cheered out of the arena, the St Paul’s clubman wiped tears from his eyes on the way backstage – and he insists this is not the last the Commonwealth Games has seen of him.

“Just when all the crowd was cheering... looking back over the last few months, it all sunk in. This medal will sink in later on.

“What a feeling, especially at 19. Hopefully I can come back in another few years and do it. again.

“In the second and third round I had to dig deep - really deep - and there were points where I was standing with him. I don’t really stand with people, but I had to do it. I came back after the second round and John [Conlan] and Damian [Kennedy] told me I was up 5-0 so I knew I had to come out and box smart in the third round.

It is to his eternal credit that, when the going got tough, he found a response. The teenager – who was supported by family and coach Ralph McKay in Birmingham - did the same at the European Championships too, the determination not to lose driving him on and ultimately bringing out his best.

“Sometimes if you’re told you’re behind, the head can go down but I went and won the round,” said Eagleson, who cited Olympians Michael Conlan, Paddy Barnes and club-mate Brendan Irvine as his boxing heroes.

“I’ve been down before and come back to win the fight so I knew I could do it. I believed in my ability coming here – I was the one to beat.

“I had a few tough fights and give credit to my opponents, but I came here to win and I wasn’t getting beat. I like to show people what I’m capable of and to get my hand raised was an unbelievable feeling.

“I surprised myself a bit at the Europeans but then after the Europeans… I’m here and everyone’s going to know about it.”