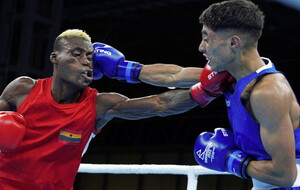 THE scary thing for rest of the lightweight division is that, despite forcing a third round stoppage on her maiden Commonwealth Games outing last night, there is so much more to come from Amy Broadhurst.

Zambia’s Felistus Nkandu provided a stiffer test than expected for a woman who won World Championship gold back in May, especially during the first round as Broadhurst took time warming into the encounter.

The Dundalk powerhouse eventually found her groove at the end of the first, with two big lefts rocking back Nkandu’s head before Broadhurst forced a standing count inside the opening 20 seconds of the second round.

When another standing count in the third was followed by a wicked left to the body, the referee stopped the contest - securing at least bronze for the 25-year-old as she faces Nigeria’s big-hitting Cynthia Ogunsemilore in tomorrow afternoon’s semi-final.

“I felt good but obviously not at my best,” said Broadhurst, who boxes out of the St Bronagh’s club in Rostrevor.

“My timing and everything wasn’t there, I was probably getting caught with stupid punches in the first round – I got caught with a few and I thought ‘Jesus, where did that come from!’

“When I heard I was boxing Zambia, I thought ‘lovely stuff’, but they’ve really surprised me, every African country, because they’ve pulled off some shocks.

“I knew getting in there today I couldn’t take anything for granted, I found that out in the first round, even though technically and physically I was probably better, there were still things I was doing wrong and shots I was getting caught with.

“But I’m happy with getting it out of the way, bronze medal in the bag as well. It was just about progressing tonight.”

Broadhurst was the last of Team NI’s magnificent seven to progress to the last four and, despite rubbing shoulders in elite company for years, she admits team-mate Dylan Eagleson has taken her by surprise.

“You have Aidan Walsh, an Olympic bronze medallist, Michaela who was at the Olympics… to be honest the one that stands out for me the most is Dylan Eagleson. He’s incredible, and he’s only 19.

“Even my dad was talking about him, saying you could watch him all day long. To be involved with such great boxers lifts me up as well.”

Meanwhile, Clepson dos Santos has vowed to win gold at the next Commonwealth Games after bowing out in Birmingham last night.

The talented teenager once again demonstrated his class as he went toe-to-toe with Jake Dodd, only for the tough Welshman to show his steel by coming on strong and forcing a third round stoppage after the Banbridge man was given three standing counts.

Dos Santos, at 18 the youngest member of Team NI, will have taken plenty from his first major games experience, and believes he will be bigger and better by the time Victoria 2026 rolls around.

“I’m still young but it’s good to gain this experience – I know that I’m 100 per cent going to the next Commonwealth Games, and I’m 100 per cent winning gold,” said the Holy Trinity flyweight.

“It was a good tough fight, credit to my opponent, he’s got a lot of heart, very tough. The better man won on the day, I could’ve boxed a lot better but you win some, you lose some. I hope he goes on and does well. I wasn’t happy with that performance, but I’m proud of myself.

“Next time will be my time.”