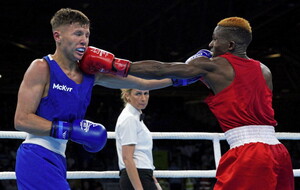 Dylan Eagleson was a comprehensive winner in his first Commonwealth Games outing, showcasing the skills that have seen him regarded as one to watch in Irish boxing for some time. Picture by PA

WITH a shimmy and a showboat, Dylan Eagleson eased into a semi-final showdown with Scotland’s Matthew McHale tomorrow – and the Bangor teenager insists he has no intention of changing his crowd-pleasing style.

With his hands hanging low, Eagleson boxed off the back foot as the aggressive Armando Sigauque from Mozambique forced the pace in yesterday’s Commonwealth Games quarter-final.

Some of Sigauque’s looping right hands whistled millimetres past Eagleson’s chin before he punished his opponent on the counter, landing beautiful short uppercuts and classy one-twos to impress the judges.

With control of contest assumed, the 19-year-old – a European silver medallist at his first-ever elite competition back in May – played to the galleries as he saw out the job, clearly enjoying the experience of showcasing his skills before a big crowd at Birmingham’s NEC Arena.

“It was good,” he said, “especially knowing my mum and my wee sister, my coach Ralph [McKay, St Paul’s] and his wife are here. They came over yesterday, it’s good knowing they’re out there watching me.

“That’s what makes me enjoy it - there’s no point getting in that ring and not enjoying it. That’s the way I like boxing, I like to do a bit of showboating.

“I knew he was just going to keep coming. The coaches watched him and told me what way to box, I had to be sharp, especially with my movement, and he missed loads.

“I’m very happy to get the first one out of the way. I know I can perform better but I’m happy with that performance because it’s been such a long wait.

“The whole team have done class, it’s just made me want to get in and show what I can do as well.”

Elements of Eagleson’s style are reminiscent of a young Michael Conlan – “I know I’m not there yet, hopefully in another few years I will be” – and he has the opportunity to change bronze to silver against McHale tomorrow afternoon.

The pair know each other, having met on an international show held at Corpus Christi boxing club in Belfast back in February. Eagleson got the nod that night but 26-year-old McHale is a seasoned operator, having boxed at World Championships in previous years.

He looked strong in victory over Muhammad Ahmad Shaharom, with the referee stopping the contest to spare the Malaysian any further punishment. Eagleson knows he will have his hands full.

“I’ve boxed him before, I know what do, just listen to the coaches this time.

“I was only 18, it was my first elite fight - I beat him, but that doesn’t matter. It’s whoever performs on the day.

“I’ve been in with top opponents now, so I know what I’m getting. I’m here for gold – I won’t be happy with anything else.”