From Andy Watters at Hampden Park 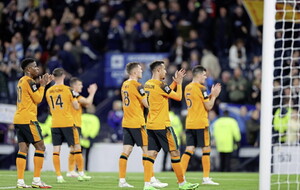 HAMPDEN Park has been the scene of so many intoxicating classics over the years and last night’s high-octane battle between these Celtic cousins was worthy of the Glasgow Mecca’s storied heritage.

It had the intensity of a derby from the kick-off until the final whistle. The tempo was high and the rules of engagement were laid out in the opening minutes when John McGinn and James McClean thundered into the first 50-50.

John Egan’s brilliant finish had Ireland ahead at the break but Ryan Christie crossed for Jack Hendry to equalise early in the second half and then, after momentum had swung one way and then the other and Troy Parrott had missed a gilt-edged chance for Ireland, Christie netted a penalty after Alan Browne was adjudged to have handled Scott McTominay’s header.

Stephen Kenny said Browne was pushed by a Scottish player which resulted in him raising his arms to their “unnatural position”.

The result means Scotland now need a draw with Ukraine to win the group while Ireland need to beat Armenia on Tuesday night to hold on to third.

Caomhin Kelleher, Shane Duffy and Browne dropped out of the side that beat the Scots 3-0 in Dublin back in June and Gavin Bazunu, Dara O’Shea and Matt Doherty came in.

For the Scots, Nathan Patterson was ruled out. Brentford’s Aaron Hickey came in while Lyndon Dykes, scorer of two goals in the 3-0 win against Ukraine on Wednesday, replaced Che Adams up front.

Ireland played with the lively Troy Parrott and Michael Obafemi in attack and they stretched the Scottish defence at every opportunity.

Christie cracked the first shot of the night wide and McTominay swapped passes with Lyndon Dykes and had a go himself but Gavin Bazunu saved comfortably.

The action was at the other end, O’Shea played a brilliant through-ball to Parrot who was clearly offside but allowed to play on and he did brilliantly to put the ball in the roof of the net before the flag went up. Ireland fans had been out of their seats celebrating but the nonsense rule soon had them sitting down again.

It was a warning Scotland failed to heed. Ireland broke after Christie’s control let him down on the edge of their box and Obafemi, out of favour at his club but playing out of his skin, and Parrott raced forward. Parrot smashed in a shot but Hendry slid in and deflected it behind.

Dykes partially cleared McClean’s in-swinging corner under pressure but Jayson Molumby headed the ball back into the area and Egan turned and sent a thumping low volley past Craig Gordon.

Scotland rallied but couldn’t break Ireland down. Christie opted to pass to Stuart Armstrong when he could have had a go from the edge of the box, then Armstrong crossed from the right but McGinn fluffed his lines when he came in to meet it at the back post.

Egan stood tall as Scotland continued to press and Doherty hacked the ball out for a throw. The Scots were patient in their build-up and another chance came and went when McGinn shot wide again, this time from the edge of the box after Dykes had nodded the ball back.

The Republic were tested but they kept their shape, soaked up the pressure and continued to look dangerous on the break. Dykes had a sniff but John Egan dived in to block his shot and the half ended when a McGinn free-kick (conceded by Cullen who had just been booked) lashed to safety by Jason Knight.

Molumby and Greg Taylor clashed as the second half began. Scotland looked to add width to their attack and it paid off when Christie reached the byline on the left and crossed to the back post where Hendry (who had started the attack) rose at the backpost and his header crept in off the post.

Ireland could have hit back almost immediately. Egan slid in to win McGregor’s attempted pass and fed Doherty who cut back onto his left boot but shot high and wide but not very handsome.

McGinn sent a shot fizzing wide as Scotland threw everything forward. And it almost cost them, Ireland turned them over and Obafemi raced clear. He played in Parrot who only had to beat Gordon but his shot was poor and the Scotland keeper saved comfortably.

Nathan Collins and Egan cleared crosses brilliantly but Ireland still looked a threat from turnovers and Chiedoze Ogbene chased a lost cause and almost forced Gordon into a mistake when his clearance ricochetted off the Rotherham forward.

The home side looked ragged again but Ireland were playing through them with poise and control and Ogbene, making the impact Stephen Kenny would have hoped for, turned Scott McKenna and passed to McClean whose shot was half-blocked and Molumby thundered in the rebound which the underfire Scots scrambled away.

But momentum swung in a heartbeat. Scotland sub Ryan Frazer took McGinn’s pass and moved the ball onto his left foot and Bazunu dived full length to save.

Kenny, showing encouraging ambition, threw in Coleman, Robinson and Browne and two of them were involved as Ireland attacked. McClean crossed and Christie did brilliantly to head the ball away. But it literally was end-to-end stuff. McGregor lashed in a shot that was blocked out for a corner. When it came in, McTominay rose highest and the ball struck Browne on the arm – it was practically point-blank range but Browne’s arms were high - and Hampden roared for a penalty.

The referee granted their wish. Christie took the spot-kick and rolled it down the middle as Bazunu dived to his right and Scotland led 2-1 with eight minutes remaining.

McTominey was booked as tempers flared. Ireland hadn’t given up but Coleman’s audacious flick went straight into Gordon’s gloves who gathered a second Coleman attempt, a header, more comfortably.

Chief contenders enter the race for the O'Neill Cup in Tyrone