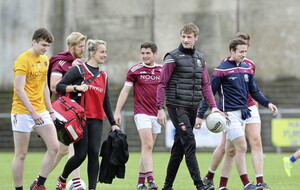 Slaughtneil dual star Brendan Rogers has been rated as 50-50 for his club's Derry Senior Hurling Championship final against Kevin Lynch's due to a wrist injury Picture: Margaret McLaughlin.

SLAUGHTNEIL are bidding to take home the Fr Collins Cup for a 10th successive time tomorrow.

It’s a fourth final meeting with a Kevin Lynch’s team bidding to collect the silver for the first time since 2011.

From that replay win over Lavey, Liam Hinphey is still on board after coming out of retirement to don the number one jersey.

Their other three survivors – Paddy Kelly, Mark Craig and Niall Ferris – accounted for 1-10 of their winning 5-11 tally 11 years ago and provide the experience.

Of the seven starters from Slaughtneil’s 2013 win over Ballinascreen, Oisin O’Doherty swaps his tally of 1-2 in attack for a place between the posts, one of the moves Michael McShane made on arriving as manager two years later.

After topping their group, Kevin Lynch’s were given an almighty test by Swatragh on a slippy afternoon when five frees from the ever-accurate Richie Mullan was enough to clinch a one-point semi-final win.

Eoghan Cassidy missed much of the season with a groin complaint, but is back and the Lynch’s picking from a full deck.

There has been a tweak this season, with Tiarnán McHugh wearing the number seven jersey in a new look half-back line after previously being their target man up top.

McHugh, Richie Mullan and Niall Ferris dominated the early stages of their semi-final until Swatragh began to bypass them.

The tight confines of the top pitch at Emmet Park limited the effectiveness of Hinphey’s sharp, long puck-outs and he’ll have more freedom in Owenbeg.

The Lynch’s attack has been centred around John Mullan at centre forward with all of this 3-10 tally coming from play. Ahead of him is the space they’ll have to maximise, with Odhran McKeever, Corey O’Reilly and former Derry ‘keeper Sean Kelly as their inside line.

A mainstay in Slaughtneil’s dominance is the goal threat of Brendan Rogers. Often on the fringes of the action before popping up to find the net.

A fractured wrist has kept out of action for the last eight weeks. The dual star had a procedure last week to tidy up the injury and Michael McShane rates his vice captain’s chances as “50-50” of making the line-up.

Cormac O’Doherty has made a full recovery from a shoulder injury in last year's final, with brothers Brian and Shea Cassidy leading their scoring charge.

Underage stars Ruairi Ó Mianáin, Jack Cassidy and Peter McCullagh have been involved this season to keep the competition for places high. Sean Cassidy and Seán Ó Caiside are both back in training in a squad McShane maintains is as a strong as ever.

Tactically, Slaughtneil have been playing Cormac O’Doherty as their sweeper with everyone dropping back a line to leave themselves compact around the middle.

It’s an area Kevin Lynch’s can exploit with Richie Mullan able to mop up ball at the other end. It will be up to Slaughtneil to engage him and stamp their authority.

The 2018 semi-final was the closest anyone has come to toppling the Emmet’s. It was an afternoon they were lucky to see a Kevin Lynch’s penalty shout not entertained by officials and the otherwise unerring Richie Mullan off target with a late equalising free.

Tomorrow is another chapter, but it’s hard to back against the champions finding a way of making it a perfect 10.

Chief contenders enter the race for the O'Neill Cup in Tyrone